The Prosecutor is known for her mad blocking skills along with some jamming-on-the-side for Houston Roller Derby. What you may not know is this amazing skater also blows the whistle for every Texas Rollergirls home game! Take a moment to learn more about how this real life trial attorney lives and breathes roller derby. 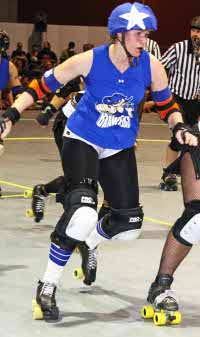 What is your (roller derby) position of choice?
Blocker

Do you have a pre-bout ritual?
I like to make sure I have plenty of time to warm up, so I like to get on the track as early as I can to start skating. I check all my gear to make sure everything is ready to go well in advance so that I can just focus on skating in the game.

What are some of your best/favorite moments in roller derby?
Traveling to Tucson, Arizona with HaRD Knocks for the First National Championship Tournament in February 2006 before there even was a WFTDA West and East. Upon entering the tournament, my league had one public bout under its belt, and when we arrived, I realized that the world of flat track derby was so much bigger (and badder) than I had ever contemplated up to that point. It was truly energizing to see these fantastic skaters and women athletes from leagues all over the country come together in the first national competition. It was at that point that I knew I had found something really special in my life.

Who are your roller derby heroes?
Any derby girl over 5’9”. Although all body types face challenges in derby, one of the things I have worked the most on is increasing my stability and lowering my center of gravity. At 5’10” it is not always easy to stay up on your skates when you are being hit by skaters naturally much lower than you. I have spent many bouts studying similarly tall skaters’ form to pick up tips on how to improve my game. A big shout out to Fisti Cuffs (Gotham Girls Roller Derby), Malice w/ Chains (Windy City Rollers), Burnett Down (Rat City Roller Girls), and Dementia (Kansas City Roller Warriors) who inspire me to keep trucking through the pack.

Do you have a motivational quote?
“Work hard, play harder.” I started derby as a stress reliever from work, but my when competitive nature kicks in, watch out!

What goes through your brain as you lace up your skates?
How lucky I am to be skating. I have suffered serious knee injuries both before and during my derby career that have made me cherish my time on the track. In late 2008, a month before Western Regionals, I tore my anterior cruciate ligament (ACL) in my right knee. Having already torn and rehabilitated my ACL in my left knee before starting derby, I knew I was in for a long recovery period before I was ready for full contact again. I sat out our 2009 home season as “retired” and volunteered to train the league at practices. I also helped out by working as a penalty tracker or referee for our home bouts. After many months of physical therapy, I came back at the end of last year and earned a spot on our travel team roster for HaRD Knocks’ appearance at Nationals in Philadelphia. All the hard work paid off, and I know it makes me appreciate and enjoy skating even more now.

Do you have a theme song?
Whatever song is playing that gets me dancing—and it doesn’t take much. I am always ready for a dance off.

Do you have a signature move?
An exaggerated hip swivel we do in warmups to loosen up our hips and get ready for hitting.

What advice would you give to someone just starting out in roller derby?
Don’t be afraid to just get out there and do it. It’s a very physically demanding sport, but the rewards are there for those willing to work hard. I wasn’t much of a skater when I started derby, and I spent most of the first few months at practice falling. Coupled with a lot of hard work and dedication, my passion for the sport continually motivates me to become a better skater. Once it gets into your skin, you’ll understand.

Anyone you'd like to take the opportunity to thank?
Being a good southern girl, a proper thank you list of all those who helped me along in my multifaceted derby career would be too long for this forum. But I have to thank Endless Justin who gave me my first whistle and my instructions on “How to Jam Time” when I volunteered to be a non-skating official (“NSO”) at the 2007 Dust Devil in Tucson. My life hasn’t been the same since.

HRD had over 20 competitors hang up their skates after the 2009 season, and we understand that your league recruited 23 rookies. What was it like to be a respected veteran member of the league with that many new gals to mentor and train, both from a business standpoint as well as a bouting/training standpoint?
I’ll admit that going from participating at the National tournament with a seasoned veteran team to almost completely rebuilding your league membership was tough. We have struggled with new issues for us, like how to competitively re-balance our home teams with a huge influx of new skaters and whether to roster rookies for sanctioned travel team games as their very first public bout. However, a “rebuilding year” opens the door to new opportunities for our league and our skaters. While it was difficult at first adjusting practices and drills for the disparity in skill levels within the league, just a few months later, it is difficult to pick out former “fresh meat” at practice. I am so proud of how far the newer skaters to our league have come in such a short time. From a business standpoint, new skaters also meant new faces willing to take on leadership roles in our league of which others had grown tired. That new energy helps keep veterans like me going as I watch them grow to love derby as I do.

You’re known as one of the top blockers for your home team, the Brawlers, but you do some jamming as well. What position truly has your heart, and why?
I don’t really have a preference as long as I am playing. If you need a jammer in a pinch, I’ll put on the panty cover. If you need a blocker to slow up the other team in the back of the pack, put me in. A pivot? Yeah, why not! It’s all about playing the game I love.

What are some of your favorite on-the-road derby experiences?
The after-the-bout parties and WFTDA conventions, no doubt, make up some of my most memorable derby experiences and are when I forged some lasting derby friendships. But you had to be there for me to tell you about it now, otherwise derby names would have to be changed to protect the not-so innocent. 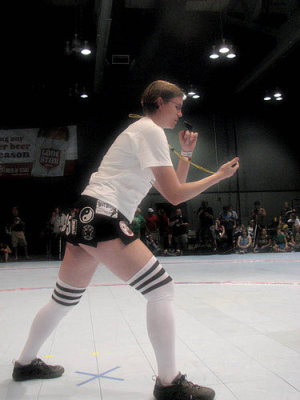 You’ve been a whistle blower at multiple tournaments and have volunteered in this capacity for every Texas Rollergirls home game for the past year and a half. You drive 2 1/2 hours to blow the whistle, show support, and drive back to Houston in the same night. That’s amazing dedication to the sport of roller derby. What motivates you to do this?
I love roller derby, and I love the Texas Rollergirls. Jam timing offers one of the best seats in the house for derby, so if you have derby like that only a few hours away, why wouldn’t you be there? I make it to Austin monthly, but I have traveled to Boston and Connecticut to jam time for Texecutioner games. Let’s just say I am a derby nerd, and I can’t get enough of it.

For your day job, you’re a trial attorney. Have you ever shown up to court with any bruises or injuries? And how did you explain those to people who asked?
Most of my law firm learned about my foray into roller derby in 2005 after I broke both bones in my right leg about four months into my derby career. Showing up on crutches to the office after having a metal rod installed in my leg from my ankle to my knee cap pretty much let the derby cat out of the bag. Since then, bruises and swollen noses are easier to explain to those that know my involvement in the sport. I have not had a judge that questioned me about an injury yet, but it definitely makes opposing counsel think twice before trying to put one past me.

What are some of your greatest roller derby accomplishments?
I hope in some small way I have contributed to elevating the profile of and appreciation for non-skating officials in the derby world. While the men and women skating in black and white stripes get a lot of attention for obvious reasons, NSOs work just as hard and largely behind the scenes to make the bout a success. NSOs serve very important roles in derby that should not be overlooked by skaters or fans. So next time you get a chance, thank an NSO for volunteering or try volunteering yourself to serve in an NSO position at the next bout or scrimmage. You might see derby from a whole different perspective. I know that if I can’t be in the game, then the only place I would rather be is blowing the whistle to start the next jam. Tweet! and Tweet! Tweet!