Racer McChaseHer managed to break the WFTDA Big Five Tournament jam record first with an amazing 32 points and even though that record has been broken again it takes an amazing jammer to rack up that many points during one jam. You may have heard her called the "Phenom" and it's an accurate moniker given her history of MVP awards. Read more about the president of the Detroit Derby Girls here... 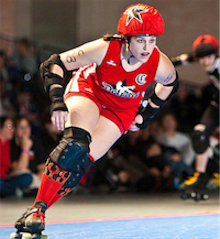 Name: Racer McChaseHer
Number: 2.8
Tagline: Tagline...hmm...I have been referred to as "the Phenom" since my first season.
League: Detroit Derby Girls
Home Team: I have played for the Devil's Night Dames for the past 4 seasons but I will be playing on Detroit's yet-to-be-named 5th team for the 2010-2011 season.

What is your (roller derby) position of choice?
If I had to make a choice of one position to play, it would be a really tough call but ultimately I think I would choose jamming. As they say...all glamour to the jammer. Ha ha!

What is your skate gear of choice?
I always, always, always wear Atom Wheels. There's nothing out there like 'em. I dig my Riedell Minx boots and rock an old school Black Diamond plate. People think I'm crazy for wearing a nylon plate but I love the flex it has. Oh, and I'm SUPER picky about my toe stops but think I have finally found the ones I've been searching for.

Do you have a pre-bout ritual?
My pre-bout ritual usually consists of sleeping in and then spinning out on my bike for 15-20 minutes. If I'm traveling, I might try to find a machine to hop on at the hotel but if nothing else, a little dynamic stretching usually does the job.

What are some of your best/favorite moments in roller derby?
My best derby moment is hands down the overtime jam versus Boston at Eastern Regionals 2007 (Heartland Havoc). I started the jam in the box and we ultimately pulled off the win and then I was named MVP of the tournament.

Who are your roller derby heroes?
I have so many derby heroes it's hard to name them all but I'll give you a few...Joy Collision, Teflon Donna, Atomatrix, Cheap Skate, Shelby Shattered, Psycho Babble, and the list goes on and on...

What goes through your brain as you lace up your skates?
When I lace up my skates, I try to clear my head and get focused on the game. That's my time with my skates where we talk for a minute and get ready to go.

Do you have a theme song?
I don't have a particular theme song although Speed Racer definitely can be adjusted to fit in Racer McChaseHer. Lol! “Here she comes...Racer McChaseHer...she's a demon on wheels.” A volunteer in our league actually gave me the modified lyrics when I first started.

Do you have a signature move?
A signature move...wish I had one...but I don't think I do anything extraordinary that only I do...at least that I'm aware of.

How would you describe your derby playing style?
I would describe my derby playing style as...tenacious. This is a tough question to answer about yourself. I've heard myself be called lots of things but I don't know if there is one word that sticks out more than others. 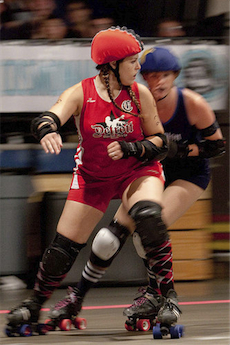 So besides being a phenomenal jammer, and the president of DDG, we understand that you're also a smart cookie: you have graduated from law school, have passed the bar, and are still captain of the DDG travel team. How do you find time for the coveted professional-life and roller derby-life balance?
Balancing the coveted professional life with the always insane derby girl lifestyle has recently become more difficult since I got a new job about 2 months ago. I was unemployed for a large portion of my term as president and I'm sure that was helpful. But just like anything else in life, balance is key.

So in 2010 you were the first skater to break the current WFTDA tournaments (only tournaments that lead directly to the WFTDA Championships) record for scoring 32 points in one jam (previously held by Charm City's Joy Collision at an astounding 30 points) in the 2010 Thunda on the Tundra Regional Playoffs. What was going through your mind as you were scoring the last few points?
When I was skating in the 32-point jam, I was just thinking to myself: “Keep going, keep going, this could be it. I think that was just 25 points. Who cares? Just keep going.” At one point, I lapped the pack twice and they didn't even get around the corner. That was some stellar pack play by boo d. livers, Bruisie Siouxxx, Cookie Rumble, and Polly Fester. I couldn't have done it without them. I was pretty psyched to hold the new WFTDA tournament jam record although with North Central Playoffs being the first tournament of the season, it didn't seem to last as long as I would have hoped. There are a LOT of quick jammers out there!!

You played Princess Slaya in Whip It; how does it feel to be a part of bringing roller derby to the masses?
It was pretty awesome to be part of a Hollywood film and to actually be cast as a specific role (that was the reason I didn't use my derby name). I'm glad that so much positive feedback and general awareness has been created from the film and it's exciting to have been a part of that.

So tell us about those bright red t-shirts that read, “Racer McChaseHer: Home of the Big Smack” with the image of the McDonald’s arches. How did those come about?
I created the Racer McChaseHer fan club t-shirts in my very first season. My brother and I had a vinyl graphics/t-shirt business so I was able to make them pretty cheap and just asked my family and friends if they wanted to buy a t-shirt when I was selling them tickets to my first bout ever. It was pretty awesome when I had 60-70 people all wearing red t-shirts in a section at the Masonic. I think it might be time for another run of those. Ha ha! Oh, and the McDonald's theme (arches, Home of the Big Smack) was just something catchy I came up with. ☺

We understand that based on the recent outcome of the North Central Playoff tournament, Detroit won't be at the Championships this year. Do you have any predictions about how the North Central teams will perform this year in comparison with the other teams?
My predictions for the North Central teams at Championships are that they will hold their own and give any opponent a run for their money. Minnesota was looking really strong (and I don't say that just because they knocked us out in the first round). They took out Madison after us and gave Windy some trouble in the first half. Madison is consistently a contender on the national level. And Windy remains untouched within the region. The rest of the country brings in some different styles of play and hopefully the NC teams can adapt. I plan to be there to see how it all plays out.

What are some of your greatest roller derby accomplishments?
My greatest roller derby accomplishments include my recent 32-point jam at North Central Regional Playoffs, my 30-point shared jam last year at North Central Regionals, receiving MVP at Eastern Regionals 2007, being named MVP of DDG for 2008 and 2010, and holding the record for the most points scored in Detroit in both home team and intraleague bouts. Oh, and now being featured as the WFTDA Skater of the Month. ☺

Anyone you'd like to take the opportunity to thank?
Big thanks to everyone who has supported me in this life-long derby adventure whether it was buying a ticket to come watch a bout, donating money for travel, giving money at fundraisers, donating equipment, cheering extra loud, or being there when things didn't go as planned.

Any other information we haven't covered in the previous questions that you’d like to share with the wftda.com readers?
I have one question for the WFTDA readers out there: Would you like to see an All-Star Game someday?