For a skater who played her home team championship game in front of a record setting 7,000 fans at the Key Arena; Anya is incredibly humble. That humility is part of her charm as this fierce skater is also known for knocking girls into the stands. When you hear that she's on your heels you better hope it's not Anya Heels as her speed an agility can take the unprepared by surprise. Learn more about this lady who was one of the MVP nominees in DNN's Best of 2009 Reader Poll. 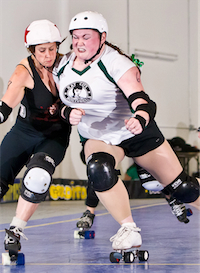 What is your (roller derby) position of choice?
Put me anywhere, I love it all!

Do you have a pre-bout ritual?
I’m not ritualistic, though I do enjoy sleeping in and a gut bomb breakfast like chicken fried steak and lots of coffee!

What are some of your best/favorite moments in roller derby?
When my home team (the Sockit Wenches) won the championships in front of over 7,000 fans at Key Arena. Year after year we took 2nd place and this season we were finally rewarded for all of our preparation and hard work.

Who are your roller derby heroes?
Carmen Getsome and Juliet Bravo from Rat City Rollergirls! I’ve said it before, and it’s worth repeating here: They’re amazing players in every way. They’re both wicked blockers and inspiring jammers. They are both SO smart when it comes to playing our sport. There are so many incredible players out there but my heart belongs to the two of them and I’m lucky to skate next to them every day. I have always looked up to them and continue to learn from them both. I love you girls!

Do you have a motivational quote?
“When you get into a tight place and everything goes against you, till it seems as though you could not hold on a minute longer, never give up, for that is just the place and time that the tide will turn.” – Harriet Beecher Stowe

What goes through your brain as you lace up your skates?
When I’m lacing my skates I think about the game I’m about to play & I use that moment to focus, tune everything else out and visualize how I can help my team play our best game ever.

Do you have a theme song?
I’m not sure about a theme song but I get really pumped when I hear Kick Start My Heart by Mötley Crüe. It’s my home team’s anthem and when I hear it played during the intro I feel untouchable. It’s definitely a physical performance cue for me!

Do you have a signature move?
Hmmm, hitting chicks in to the stands? ☺

What advice would you give to someone just starting out in roller derby?
Never let your size dictate how you play this sport or your confidence in doing so.

You are an extremely agile skater who’s known for being incredibly stable on your skates. What past experiences (pre-derby) do you attribute this to?
Wow, thank you! I grew up on skates. Instead of hiring a baby sitter, my mom would drop us kids off at the rink, it was a great way to kill time and have fun.

We understand that you're one of the most admired derby girls in the northwest for both your general demeanor as well as for your playing. What is it like to be a feared blocker who has no problem putting on that jammer cap, and being successful at it too?
Am I?!? That’s so nice to hear! I think it’s hilarious that people “fear” me as you put it. If they know me at all then there’s nothing scary about me. Unless you’re a jammer. Ha! I enjoy jamming, especially when the other team (or even the fans) underestimate me. It’s fun to surprise them. I’ll admit though, I’d never get through if it weren’t for the offensive efforts of my teammates. They should get the credit for my success as a jammer. 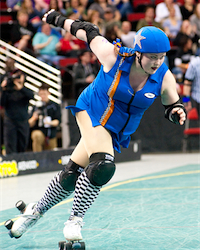 How would you describe your derby playing style – as both a blocker and a jammer?
I play according to what my team needs from me and that can vary from game to game. I always leave it all on the track, sometimes it requires fast paced play with hard hits or a slow tactical game. As a blocker my “style” typically includes a lot of hard hits while my jamming style has been described like that of a Mack Truck. ☺

What’s your current record for the most points you scored in one bout, and how did you feel after that accomplishment?
I’ll be honest, I’m not sure about most points scored in a bout but I do recall a game in which I had a 20 point jam. My blockers forced a slow and tight pack and I was able to just skate laps around them, it felt incredible!

You just took part in the Hometown Throwdown; many WFTDA leagues are putting together multi-bout weekends to make the most of their travel. Can you tell us a little more about how the weekends have been set up with this type of play? How do you feel about multi-bout weekends?
I think multi-bout weekends are fun. You get lots of time to bond with your teammates which really helps the way you play together and you have the opportunity to both play and watch more than just the one team you’d play if it were a standard bout. It’s also really tiring so I don’t know that each team is putting its best foot forward by the end of the weekend but that’s a factor for which you should train/prepare. It’s also awesome for the fans, we had some Seattle based fans follow us down to the Hometown Throwdown and said that having THAT much derby in ONE weekend was a dream come true.

Rat City is once again going to be playing in the Western Regional Playoffs this year. How do you feel the team is going to do? Do you have any predictions on the All-Stars making it to WFTDA Championships? We are so excited. We’ve been working hard in preparation for Western Regionals and are ready to take on our opponents. I feel strongly that we are going to meet our team goals and in turn earn our spot at the WFTDA Championship tournament. Gooooo Rat City All-Stars!

What are some of your greatest roller derby accomplishments?
I’m proud to be a member of the Rat City All-Stars. This is a great team both in terms of talent and character and I am so excited to be a part of it all. I’m also very proud to have been included in the category of DNN’s National MVP contest. It was an incredible honor and a highlight of my derby career to be included with the caliber of skaters in that group!

Anyone you'd like to take the opportunity to thank?
I’d like to thank my husband Juan, a.k.a. “Juanya Heels” (he HATES that name) for all the support and understanding required of a derby widow. I also want to thank Carmen Getsome from Rat City, she’s the one who introduced me to derby and if it weren’t for her, I probably wouldn’t be playing today! Finally, I'd like to thank all of the coaches and teammates I've had the good fortune of skating with along the way.