Hydra, of the Texas Rollergirls, is one of the founders of WFTDA, an original contributor to the United Leagues Coalition (ULC)--the predecessor to the WFTDA--and has been involved with interleague relations since early 2004, and served as the organization's first president until future league-mate Crackerjack took over in May of 2007. She continued to serve the WFTDA with the title as past-president until her retirement from the board of directors in December of 2009. Before the board of directors was formed in 2006, Hydra was central to the creation of the formal organizational structure of the WFTDA, developing the mission and brand, and putting into place many of the technologies and membership training that make the organization run. Hydra has been a big part of WFTDA since the very beginning of our organization, and we'd like to take a moment to introduce you to this amazing woman who changed WFTDA forever. 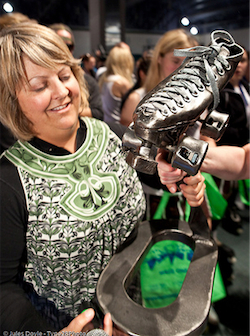 What is your (roller derby) position of choice?
Pivot

What is your skate gear of choice?
Pro Design pads kept me skating for at least a year longer following my initial knee injury. Wild Bill's pads are my absolute faves.

I've never been a skate freak—I could make due with whatever; plus I'm not fast enough for it to make a difference. I've been in Riedells my entire derby career. Started out with Carreras, then moved onto 125s and never got much further than that. I'm currently skating in a pair of 265s that I'm borrowing from Cat Tastrophe. Thanks, Cat!

I am loving Atom Wheels. I've just about worn through my D-Rods and am ready to switch to the new set of Strokers that I have setting in my house.

Do you have a pre-bout ritual?
Back in the good 'ole days, my neighbor Pixie Tourette would come over and we'd do our hair and make up while listening to punk rock classics and drinking one Tecate (beer). After things became too serious and important to be drinking a beer before a game, I shifted my pre-game ritual to a nap and a big, healthy meal 4 hours before the game. One hour before the game, it was equipment check time: wipe down the wheels, check my laces, and make sure I have all my pads, helmet, and mouth guard in my bag.

Who are your roller derby heroes?
From my own league: Sparkle Plenty for the longest derby career at the time and being my right hand woman, even during some very rough times. Dinah-Mite for showing the Texas Rollergirls the road to higher athleticism and play. Rice Rocket for being an inspiration to so many skaters in the derby world, giving so much to the Texas Rollergirls while off skates, and for having fantastic matrix moves. From other leagues: Bonnie Thunders (Gotham Girls Roller Derby) for her cat-like stealth and grace, D-Bomb (Oly Rollers) for her absolutely devastating blocking and pivoting, and Athena DeCrime (Windy City Rollers) for showing such amazing improvement.

What goes through your brain as you lace up your skates?
What does my team need to do to win?
What's Plan B?
Keep it cool—no one freak out!

Do you have a signature move?
Everyone knew that they'd never get past me on the inside line. Bonus points when I could pull this one off: holding back their jammer and whipping my jammer around the outside.

What advice would you give to someone just starting out in roller derby?
Understand the time commitment because it's huge and you can't avoid it. Roller derby can change your life—make it a change for the better!

Anyone you'd like to take the opportunity to thank?
Thank you to Crackerjack (Texas Rollergirls) for stepping up to the plate, becoming the second WFTDA President, and continuing to lead the organization with great smarts and attitude. Thanks to Bloody Mary (Texas Rollergirls) for applying to become and accepting the offer to work as the WFTDA's first Executive Director. Thank you to the Texas Rollergirls for continuing to treat me as a valued member of the league. Thanks to the Austin Roller Moms for coming to the Texas Rollergirls and initiating the Rec-n-Roller Derby, which has given me a chance to keep skating roller derby even when I can't keep up with the big girls anymore!

Tell us about your greatest accomplishments during your WFTDA presidency.
I'm most proud of being able to take the WFTDA from a group of women/leagues with loose ideas of what we wanted [and turn them] into a formal, organized association. It's difficult to develop an organization when its members are spread across the country, have various interpretations of the game, and different visions for the future. Being able to corral that variability into an association that was able to run smoothly (at times, and hobble along at others!) is my greatest accomplishment. However, I surely didn't do it alone. The organization was built from the cooperation of numerous women. Maybe my ability to get everyone to work together towards a common set of goals should be considered a greater accomplishment?

What are you going to do now after your retirement from the WFTDA BoD?
I'll continue playing roller derby with the Texas Rollergirls recreational league. And, I'm the new program coordinator of our junior and recreational divisions. If time gets freed up for non-derby activities, I'm looking forward to more remodeling projects at my house, kayaking, snorkeling trips, and taking my pups wherever they're allowed.

How does it feel to have the coveted Hydra Trophy named after you?
I'm so amazingly honored. It's kind of hard to describe. Thank you to the WFTDA for remembering me. Oh jeez, I'm going to cry again just thinking about it!

How did you choose the skater name Hydra?
When I joined roller derby in 2001, my team captain told me to pick a name for practice the following week. She suggested that it might want to have something I do for a living, or a hobby.
Part 1: Professionally, I'm a hydrologist (water-quality scientist).
Part 2: I had a class in Greek mythology the semester before I tried out and learned about the (Lernaean) Hydra. The Hydra was a water-beast with 9 heads that lived in a lake and guarded the entrance to the Underworld. When a head was cut off, two grew back in its place, so fighting the Hydra was a hopeless battle.
Part 3: I used to love the American Gladiators when I was younger and thought it would be funny to have a name like one of the Gladiators (like Nitro or Blaze).
Add parts 1 through 3 and you get the roller derby skater: Hydra

Would you like to be the WFTDA Featured Skater of the month? If you are an active skater on a WFTDA full member league that has a dazzling derby career, please contact webmaster@wftda.com and let us know what makes you shine.