The 2010 WFTDA Championship MVP, as voted by the skaters in the tournament, is Sassy of the Oly Rollers’ Cosa Nostra Donnas, WFTDA’s 2009 Champions. This year the Oly Rollers relied on outstanding blocking from this particular skater to play in the closest-ever WFTDA Championship bout (147-146). While it takes a whole team to play the challenging sport of roller derby, Sassy is one player whose bold stance on the track made her the standout MVP. Learn more about Sassy...

Name: Sassy
Number: 2
League: Oly Rollers
Home Team: I don't play on a home team, I just play on the Cosa Nostra Donnas travel team. Oly Rollers have never followed the dominant modern derby model. Instead of attempting to bout our own selves, we have always been drawn to bout outside of our league. For one, we are a small town, but also, we were more interested in the challenge of bouting the unknown, and staying together as a group. The Cosa Nostra Donnas team was developed in 2007. By 2007, our league had grown enough that we needed our travel team (Cosa Nostra Donnas) and our developmental team (at that time, the Prima Donnas).

What is your (roller derby) position of choice?
Pivot. I would love to jam, but my team says I am too old. P.S. 41- for D-Bomb.

What is your skate gear of choice?
I use Mennighini roller hockey boots from Italy, and Boiani plates. I also use Atom Wheels. Atom Wheels is a proud sponsor of the Oly Rollers. Co-owner Julie Glass (aka Atomatrix) brings a lot of skating experience to the floor, and of course that’s a benefit.

Do you have a pre-bout ritual?
Before a bout, I eat spaghetti with ketchup. This ritual started when I was a young skater. I skated all around the world and this is the one meal I could count on to taste pretty much the same. It is beyond “carbo-loading,” it’s comfort food.

What are some of your best/favorite moments in roller derby?
Winning the 2009 WFTDA National tournament in Philadelphia, PA was phenomenal. But truthfully, taking women who have never skated before, training them, and taking them to nationals is an equally proud moment. 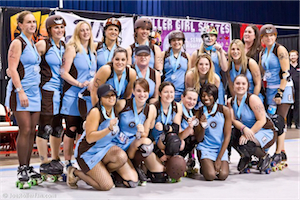 Who are your roller derby heroes?
My derby heroes are my kids, and my team. I am a mom of three children, and they have paid the biggest price for my commitment to this sport. At the same time, they are the reason I choose to play derby at the highest level with the most athleticism. This is an example I want my daughter and sons to see. Derby is a team sport. Our team is full of amazing individual athletes, and we’ve even been given the nickname “Oly-Bots.” But we are a team; we win or lose based on our teamwork. Every girl that comes to an Oly practice, and hangs in, is a hero. Ask any skater who has.

What goes through your brain as you lace up your skates?
I mostly think: “Do people like my uniform?” 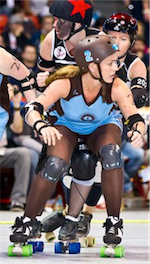 Do you have a signature move?
My ass in your face.

Advice for girls who want to join roller derby?
Roller derby is harder than you might think: emotionally, physically, etc. At this level, it’s a full time job. In addition, there are a LOT of personalities to contend with when you have 30, 60, or 90 strong women together. This isn’t something most women think about when they want to join roller derby. I recommend that girls drive as far as it takes to find a league you fit in with. The league closest to them may have a different view of what they want to focus on, e.g., show versus sport; among other aspects that may prove to be a “fit” or not. I think the best chance at fit will simply be determining what a beginning skater wants to get out of their derby experience: friends, competition, recreation? And then find a league that seems to have the same vision.

How would you describe your derby playing style?
I try to use skill over aggression. My skills as a skater developed over decades. I have competed internationally in speed skating and hockey, so a strong foundation is my biggest asset. Having said that, I am a very aggressive skater: I see what I want, who I want and I go after it – with control and focus.

How did you get involved with roller derby?
Someone asked me to play. Truthfully, I can’t remember who asked me. But I do remember having a conversation about roller derby with Tannibal Lector in January of 2006. We had a few women in the community approaching the rink my family owns inquiring about derby and Tannah and I decided to give it a go.

What is your sports/skating background?
I was on team USA for speed skating and hockey in the past. All of my skating has been done on quads. I coach inline, but have skated only on quads at both a national and international level.

You won the MVP award at the 2010 WFTDA Championships, how does it feel to have such concrete proof of your awesomeness?
Awesomeness? Where do we start with that? I never set out to prove anything, but to get 20 girls together to win games. The fact that the MVP award is voted on by the best skaters in the WFTDA is an amazing and unexpected honor. I was shocked and very humbled. It means a tremendous amount to me.

What is it like to be only the second blocker to earn the honor of being named Championship MVP?
It’s an honor, and great that people can see that every position in roller derby is important.

Last year your team won the WFTDA Championship title and now in 2010 your team earned 2nd place, losing the Championship game by only one point. How does it feel to be part of such a dominant team in our sport? What do you attribute your team's, and your own, success in this sport to?
This year was educational for us; we learned that everyone in the sport worked hard on their game last year. It was nice to see all of the top leagues raise their game to another level.

The Cosa Nostra Donnas was officially formed in 2007. Prior to that, we were simply the Oly Rollers, a league that formed in 2006. It’s been a long three years for our team and coaching staff, but we will continue to work hard on detail and to make derby more enjoyable for the fans. I am not sure if our emphasis on athleticism in the way we “do derby” has made derby more enjoyable. There are amazing examples of leagues that put on spectacular shows, as well as perform athletically. We have simply made sport our sole focus. I am told that some fans find this very enjoyable, and I am sure there are some who wish we would be more “show.” 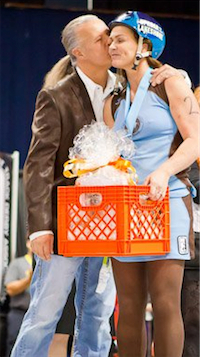 What are some of your greatest roller derby accomplishments?
Setting goals as a team and accomplishing them. Initially, in the summer of 2007, we set the goal to earn a spot at Nationals. Winning Nationals in 2009 was never the goal; simply making it to Philadelphia was. As you can imagine, our goal for this year was to maintain our WFTDA Championship title. In addition, in 2010, we had the goal of bouting the widest variety of teams we could afford to.

Lastly, I want to thank our coach: EC.  He is so much more than that to me. He is my love, my best friend. His support of this crazy pursuit has meant more to me than he will ever know.