Don't let her size fool you. To do so on the track is to find yourself off your skates. This instrumental trainer has helped turn the Atlanta Rollergirls into a focused sports team, and she's already started working at training with her new league the WFTDA Apprentice Paris Rollergirls. She's rough and tough (going through up to four sets of wheels a year); learn more about Amelia Scareheart... 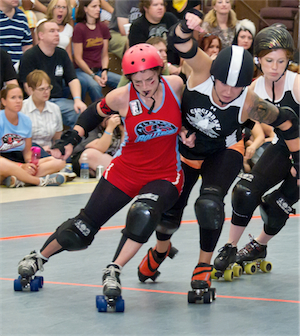 Name: Amelia Scareheart
Number: B-52
League: Formerly of the Atlanta Rollergirls (ARG), now playing for the Paris Rollergirls.
Home Team: I played for the Toxic Shocks for 4 years. During my 5th season I only played for the Dirty South Derby Girls (DSDG) the ARG all-star team.

What is your (roller derby) position of choice?
I really like playing the blocker 2 and 4 positions. I also really like to jam but it’s not always where I’m needed.

What is your skate gear of choice?
I am very hard on my wheels and go through 3 or 4 sets a year. I have found that my favorites so far are the Atom Low Boys. If I need very grippy wheels, I really like the Radar Shadows. As far as gear, I’ve had success with the 187 knee pads. They lasted me 4 years before they started to wear. I’m hoping to get a new boot soon. I’m leaning towards the Riedell 965. I’ve been skating on the 265s for 3 years and, well, the boots are pretty beat up.

Do you have a pre-bout ritual?
About 3 hours before the game I start amping up and amping up my team. We would do typical stuff like playing music, doing team chats, and tapping into our inner spirit animals.

What are some of your best/favorite moments in roller derby?
All of last season was “the best” derby for me. I was the DSDG captain and got to spend a lot of time with some of my favorite people in the world. It was by far the best time I have had in derby and it lasted all year.

Who are your roller derby heroes?
I think all rollergirls that work their ass off to be better at derby are my heroes...I swear...and Merchant of Menace.

Do you have a motivational quote?
I’m probably the least eloquent derby girl out there, so I try to motivate players by reminding them why we put in all these hours and need to put in 100%: To play “the best sport ever” and have amazing experiences, win or lose. Each player makes the decision about how much they are going to push, so give it your all every time you train or bout.

What goes through your brain as you lace up your skates?
How much I need new skates…haha. I actually get pretty excited when I lace up. I think of how much fun it is to skate.

Do you have a theme song?
Hmm…I have been assigned “Get Low” by Lil Jon by DSDG. But before bouts I really like to listen to this song by Cheeseburger called “Derby Days”, although I know it’s not about roller derby, it makes me feel kind of rock-n-roll. 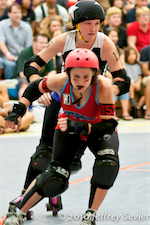 Do you have a signature move?
I’m pretty small (5’2”, 135lbs) so I have to use my ability to get low to my advantage. So, I guess I am known for my low lateral blocking. If I do it right, low, and super wide, I can grab someone on my booty and ride them on my back, tossing them out of bounds.

Advice for girls who want to join roller derby?
Being good at derby takes a lot of time, hard work and commitment. You must be fit and be willing to take a lot of chances. But it’s 100% worth it. It will be the most fun you have ever had.

How would you describe your derby playing style?
In the moment: I try to prepare by being fit and well practiced because I am adrenaline driven during a game.

How did you get involved with roller derby?
6 years ago ARG was recruiting. I went to one practice and was hooked.

What is your sports/skating background?
I have no skating background. I played softball as a kid but really that’s it. I have always been interested in fitness though. Roller derby is the first sport I felt passionate about.

The Atlanta Rollergirls credit you as the most influential skater in turning ARG's focus from spectacle to sport. Why did you think this was important for ARG? How did you accomplish this transition? What advice do you have for other leagues that may still be struggling with making a decision about sport versus spectacle?
I can’t take credit for turning ARG's focus from spectacle to sport. This was something that the majority of early ARG players wanted, as we were influenced by the WFTDA and other big sister leagues like the Texas Rollergirls.

As a very vocal, often loud trainer, I think I was able to express the goals of a group of trainers that pioneered athleticism as the main focus for ARG. I am a tough love trainer and want my players to get better. My goal as a trainer is to motivate my players to improve.

If a league is struggling with making a decision about sport versus spectacle, I would say go watch WFTDA games and see the athletes in action.

As the Atlanta Rollergirls all star team captain, this season you helped lead the Dirty South Derby Girls to their highest ranking in the WFTDA, currently 4th in the South Central region. As captain, what do you feel your role is on the team, i.e., general responsibilities, in the locker room, on the track, etc.? What attributes do you feel a successful roller derby team captain should have?
As captain, I think my role is to be the liaison between the players and everyone else—coaches, refs, etc. I also need to motivate, help resolve conflicts, and keep the team focused on the goals we set together. I try to motivate players by reminding them to have fun and to do their best, and again remind them how awesome it is to play derby, and what a privilege it is to be where they are. You have to put some responsibility on the skaters too by letting them have buy in, and making them accountable. They have to be an active part of the success by making suggestions and coming up with personal goals.

We understand that recently you made a big move, from Atlanta, GA to Paris, France. Could you share a little about why you relocated your life across the Atlantic? How are you feeling about ending your time with ARG?
I moved to Paris in November 2010 to join my husband Andy, who is working here. It was very difficult to leave my derby family in Atlanta, but it was more difficult being away from my husband. He is very supportive of derby and actually did research to see if there were derby leagues in France. Paris does have a WFTDA apprentice league and in true derby girl fashion, they have been so supportive and have opened up their league to me, which has made the transition much easier.

During your time with ARG, you've been a big part of training the league. With your move to France, are you going to be able to continue that role with the Paris Rollergirls? How do you feel about starting again with such a new league?
Starting over with a new league has its challenges, but these girls are so motivated, which makes me excited and proud to be a part of the league. I’m so impressed by the WFTDA’s support of the worldwide growth of derby. I am already helping with training plans for the next year and I’m attending the European Roller Derby Organizational Conference (EROC) in January. YES, I’ll be skating.

What are some of your greatest roller derby accomplishments?
Again, back to last season, I am really lucky to have been a part of ARG’s moving up the WFTDA ranks during the 2010 season. I am really proud of ARG.

Anyone you'd like to take the opportunity to thank?
My husband deserves a thank you. He’s been the funniest, most supportive significant other ever.

Any other information we haven't covered in the previous questions that you’d like to share with the wftda.com readers?
Come to Paris!!!