As a sports fan you may have heard of the Nebraska Cornhuskers and know Lincoln, NE as a city swathed in Red. The No Coast Derby Girls also call this city home and have been working hard to turn Lincoln into a derby community; complete with their own derby-themed ice cream flavor. Read more about what these ladies are doing to prepare to host the South Central Regional Playoffs... 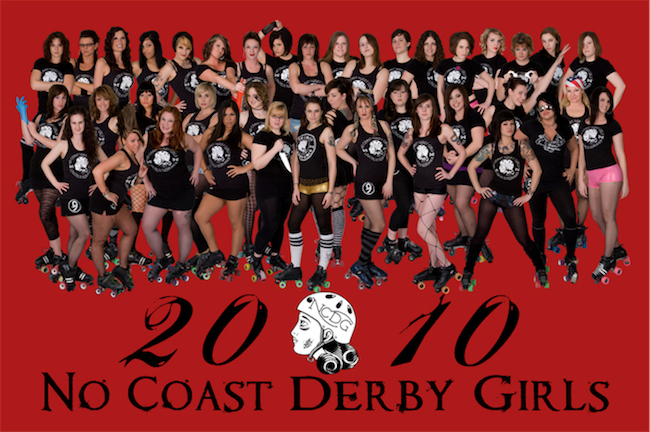 How does your season run?
Our regular season generally runs from February to late August.

How many skaters/teams do you have?
We are a smaller league consisting of approximately 40 active skaters and two teams: our traveling charter team, the Mad Maxines, and our non-traveling B Team, the Road Warriors.

How is your league structured (home teams, travel team, management)?
No Coast is run by a league-nominated Board of Directors. We no longer have home teams but have moved to the A/B format to provide more bouting time for everyone.

How many days a week do you practice?
We practice 3-4 days a week depending on practice space availability. We also do lots of off skates work as well to build that endurance!

Who is No Coast's biggest rival? And have you had any outstanding, memorable moments against them when you bouted?
Omaha has been a HUGE rivalry since our very first season. We’ve bouted these ladies more than any other league due to our close proximity and the games have always proven to be our most intense! One of our newest and most interesting rivalries would have to be the Tampa Bay Derby Darlins. They have proven to be a great team both on and off the track and we’re anxious to host them in Lincoln soon!

What are the individual challenges of your city?
We have a great fan base but we do have to compete with the University of Nebraska-Lincoln Cornhusker Football program, which attracts over 80,000 people to the city for each home game.

Who are some of your favorite sponsors?
We have a wonderful relationship with the venue that hosts our after-parties for us, the red9! They have provided an amazing space for us to show the leagues that visit us in Lincoln a great time.

What are your biggest training challenges?
New drills and ideas are constant challenges as well as the wide range of ability that comes with training a league. We’re a smaller community than most, so finding interested and dedicated skaters does prove a challenge at times.

Who are the best "behind the scenes" skaters who make your league run?
The 5-member Board of Directors is at the core of the NCDG and they continue to keep things moving in a positive direction as we prepare to host the South Central Regional Tournament, Amber Waves of Pain, October 8-10, 2010.

Who are some of your star on-track skaters and why?
Flash Gloria came into derby as a former track athlete and she has proven to be a consistent scorer for the league. This girl gets leaps and bounds better season after season. ThickaThanAhSnicka is a force at the front of the pack and is known nationwide for that booty block. It will foul up any jammer’s ability to glide through the pack untouched. Kelly Ripa-Nipalov is a force to be reckoned with at the back of the pack as the NCDG one-person impenetrable wall. She is the first line of defense with some hard hits that slow those jammers down!

What kind of training/bouting facilities do you have?
We are an extremely lucky league to have a venue that can seat 4000 people in the seats and few hundred more on the floor. Pershing Center is host to all of our home bouts and many of our practices. When that venue is occupied we practice at our local roller rink that is a gracious sponsor and provides the space in exchange for advertising at our bouts!

No Coast has been sitting in the top 10 South Central Region WFTDA rankings for quite some time, any plans to try to break into the top 5 for the remainder of 2010?
Yes! We are aiming high this Regional tournament and hope to accomplish just that. We feel confident that Regional Playoffs will finally give us the chance to prove ourselves as a serious contender in our region.

You’re one of those "sleeper leagues" right now, winning your past 5 bouts since April 2010 over Green Country, West Texas, Sioux Falls, Dixie and Omaha, but in the Clover Cup in March lost to Atlanta by 167 and Tampa by only 12. What does the remainder of your 2010 season schedule look like? Any plans to play Houston, Nashville or Dallas that we should be watching closely?
We’ll hopefully have that opportunity at the South Central Regional tournament! Our last home bout of the season will be against Pikes Peak on August 21. Travel costs have put a damper on meeting up with these teams outside of the Clover Cup, as we’re trying to watch our spending due to hosting the South Central Regional tournament. We definitely have plans to bout these leagues in 2011 for sure.

No Coast is hosting the 2010 South Central Regional Tournament, October 8-10, “Amber Waves of Pain”. What made your league decide to take on hosting this event?
We felt it was time to showcase Lincoln and our venue, Pershing Center! We have an AWESOME, supportive venue that is really working with us to make this run smoothly. Lincoln, Nebraska is the home of USA Roller Sports and is really a skating town; the city hosts the USARS Speed and Figure Skating National Championships bi-annually.

Who do you foresee as being the unsung heroes in getting this regional tournament put together for your league? And how hard are they working right this very second?
Our co-chairs, Alicia Teaze and Kelly Ripa-Nipalov along with another half dozen planning committee members have been working since last May to put this Tournament together. Daily, by the hour even, they have been working to organize this event down to the smallest detail.

Rumor has it that your team has its own ice cream flavor! How cool! Tell us more how this came about?
Another great sponsor, Ivanna Cone, brainstormed and came up with the idea of making our very own flavor, NCDG Roller Derby Bruiseberry, that would be on-sale the weekend of our bouts. It’s a really fun thing to do the day after the bout as a team to head down to Ivanna Cone and enjoy our flavor! We really do have an incredibly supportive community!

Is there any other information that you would like to share with wftda.com? Upcoming plans for 2010, other tournaments you'll participate in, big road trips, etc?
We’ll be focusing on hitting big tournaments in 2011 including ECE, Brewhaha, Clover Cup, and more. Last year’s Regionals in Atlanta was our first taste of big tournament play and from that experience we knew that we had to change up our training methods for 2010. We have been working hard at that and we hope to prove ourselves at the South Central Regional tournament and beyond. Financially this season, we had to tighten the purse strings and stay local in order to fund the tournament. That being said, you will see a lot more of No Coast in 2011.

We’re also looking at teaming up with Omaha as far as being hosts next season to a few weekend match-ups. We’d love to bring in two WFTDA leagues to play both us and Omaha over a 2- or 3-day weekend, maybe finishing up with those two leagues playing each other on day 3. I think it would be a great way for two visiting teams to get in three WFTDA sanctioned bouts in one weekend…more bang for the buck.

After hosting South Central Regionals, No Coast will be looking for a league to visit that can show us a good time on and off the track. We’ll definitely be ready to celebrate all the work that it takes to host a great tournament!

Do you have a special message to your fans?
Our community is amazingly supportive of derby. Our venue really fostered the relationship because a large venue can really facilitate our sport by legitimizing it to the city. Lincoln has been known for decades as one of the best sports following cities in the country mainly due to Husker football. However, we have a strong hockey and semi-pro baseball following as well in this town. Now they have roller derby, too! Attendance is soaring this year and we feel we’ve really turned the corner this season as far as interest goes in the sport.

No Coast has the best derby fans in the country and if you don’t believe it, come see for yourself October 8-10 at the South Central Regional tournament. I guarantee they will become quick fans of all 10 invited teams!