Although they claim to not be any good playing as themselves in Jam City Rollergirls, the Mad Rollin' Dolls of Madison, Wisconsin certainly tear things up on the track. Four home teams, two travel teams, and over 150 skaters and volunteers give their fans plenty to cheer (and cowbell) for. Learn more about the moo here...

How does your season run?
Our home season consists of seven double-header bouts from mid-December through early May. All four home teams play during the Season Opener, Semi-Final, and League Championship bouts. For the other four bouts, each team gets a bye night and we bring in a visiting team from another league. Our interleague season can start at any point during the year (this year's first interleague bout was on January 29, when the Dairyland Dolls faced the Minnesota RollerGirls All-Stars in Minneapolis) but is most active between May and November.

Are you close to any other WFTDA leagues?
There are three full WFTDA member leagues in Wisconsin besides MRD – the Brewcity Bruisers, Paper Valley Roller Girls, and Fox Cityz Foxz. And nearly every new crop of WFTDA apprentice leagues has one of our neighbors in it. It's really exciting to see such a growth spurt in regional derby! 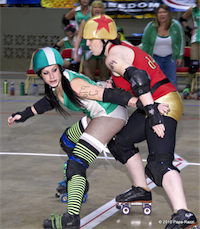 How many skaters/teams do you have? And how is your league structured (home teams, travel team, management)?
MRD consists of four home season teams – the Quad Squad, the Reservoir Dolls, the Unholy Rollers, and the Vaudeville Vixens – each with 20 skaters. From those rosters come our two interleague teams – the WFTDA-ranked Dairyland Dolls and our non-chartered Team Unicorn. We also have two additional teams - our refs and NSOs, United Derby Officials Local 608, and Team Support, which has almost as many members as the four skating teams.

In order to put on our bouts and plant butts in the seats, MRD has 15 committees that ensure the league runs smoothly and keeps growing. At the top of the pyramid is an Executive Board consisting of seven members, including the General Manager. Skaters and staff members elect committee managers and EB members annually.

How many days a week do you practice?
We have three All-League Practices, one Interleague Practice, and one rotating team practice per week during the home season. The schedule is slightly different in the summer to accommodate the busier interleague season and our fresh meat Babydoll Boot Camp. In addition, skaters can opt in to a weekly conditioning class held by our rink's manager, a former speed skater.

Who is MRD's biggest rival? And have you had any outstanding, memorable moments against them when you bouted?
We have so many great rivalries, it's hard to pick just one. Right now it's probably the Minnesota RollerGirls, whom we defeated the first few times we met up with them in 2006 and 2008. The rivalry kicked in with their upset win against the Dairyland Dolls at the 2010 North Central Region Playoffs tournament. They came in ranked 7th and stunned us with their excellent pack play and deep jammer rotation. Plus, they took Juke Boxx away from us, and revenge will be ours (wink, wink).

Do you have any sister leagues you’d like to give a shout out to?
Our first shout-out goes to the Mad Wreckin' Dolls, the only recreational roller derby league in the state. They're currently in their third session right now and have 80 skaters total with a waiting list that keeps growing. We are proud to be affiliated with them and are so happy that their founders made this dream a reality!

The Brewcity Bruisers have been a sister league of ours from the beginning. They started up within a year of us, and both our home and interleague teams have faced each other on the track multiple times, and we provide support for each other whenever we can. The Stateline Derby Divas in Beloit have a special place in our hearts, too, and we're excited to see them flourish as a league.

What are the individual challenges of your city?
Madison's biggest challenge at this point is the fact that there is only one roller rink in the city, and this is the only available option for practice space at this time. Also, the crazy Wisconsin winters can make getting around somewhat challenging, although snow doesn't seem to deter our fans as much as a Green Bay Packers game.

Who are some of your favorite sponsors?
MRD is extremely fortunate to have many wonderful sponsors, and our family grows bigger every year. Some of the stand-out ones are Ale Asylum, PBR, Plan B, WORT, Smart Scion, Vintage Brewing Co., High Noon Saloon, Inferno, Capital City Harley-Davidson, Just Coffee, and Hinckley Design & Production.

What are your biggest training challenges?
It all boils down to limited access to practice space. In addition to public skates and birthday parties, we have to share the rink with the Mad Wreckin' Dolls and the local roller hockey league, so additional time on the track is extremely hard to come by.

Who are the best "behind the scenes" skaters who make your league run?
With over 150 skaters and volunteers, it's impossible to say there are only a select few members who make the league as successful as it is. Mad Rollin' Dolls is a massive collective effort, and we wouldn't be able to exist without all of the support we get from our league-mates.

Who are some of your star on-track skaters and why?
As with our behind-the-scenes heroes, to single out a select few skaters feels like it would cheat so many of the others. Sure, there are obvious names that we could throw around, but we would prefer to have people check out our bouts and decide for themselves who their personal stars are (If you can't make it to Madison, you can always buy our bout DVDs, available in our website's Merch section). 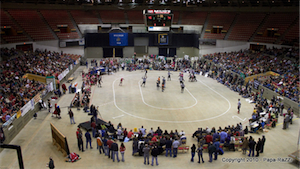 What kind of training/bouting facilities do you have?
We practice at Fast Forward Skate Center and used to hold our bouts there, too. We outgrew their space during our fourth season, however, so we moved to the Alliant Energy Center after hosting the 2008 WFTDA Eastern Regional tournament there. The people at the Alliant are wonderful to work with and have gone out of their way to accommodate us. Most of our bouts this season will be held in their Veterans Memorial Coliseum, which seats about 8,000 people. Occasionally we hold bouts in their Exhibition Hall, which seats about 1,500 with our setup. But we sold out all of our bouts there last season and had to turn people away at the door each time, so obviously we prefer the Coliseum.

As a veteran roller derby league, what advice would you give to the many new leagues that have just started rolling?
In a nutshell, don't give up when you hit a rough patch, even if it comes from within. There will be conflict among league members. There will be tough decisions, growing pains, and great challenges. But no matter the adversity, derby love conquers all. Sometimes the people who give you the most grief are the ones who respect you the most, because they trust you to give it right back to them with honesty. And the business side of things has a tendency to stress us all out from time to time, but you just need to keep reminding yourself how far you've come and stay in tune with each other about where you want to go. 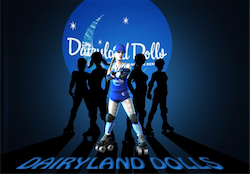 MRD is one of the leagues featured in the Jam City Rollergirls video game. Has the league had a chance to play the game and what is it like to be able to play as yourself?

Chop Suzzy, as quoted in an article on Madison.com:

I sucked at it, but it was still really fun. It was a lot more dynamic than I thought it would be – they had some fun hits, and (Frozen Codebase) did a great job on the teams' individual tracks. They really captured the character of each of the teams. The input they have taken from us has done a lot to capture our image and the details of our players. Down to the kind of socks and jewelry we wear. For me, that makes the game authentic, personal and exciting. I see my character and think, ‘Oh my god, those are my favorite game socks!'

Mouse, as quoted in an article on Dane101.com:

Haha! Yeah, turns out my hand-eye coordination does not compete with my legs-skates coordination. We had a fun time with it, though. I feel extremely lucky and honored to have made the cut on behalf of my team – I'm livin' the dream!

You have adopted a local highway that the league keeps looking neat and tidy. How did this get organized and how often do you tend to your ditches?
Our Community Outreach and Charity committee first organized the effort circa 2006. All skaters and staff members participate in at least two volunteer events per year, so we do around 30 or 40 events annually. We tend to our stretch of Route 51 a minimum of four times per year.

On your website you have a Fan Zone where you post trivia questions that fans can answer for a chance to win bout tickets. Who came up with this great idea and on average how many respondents do you get?
The website trivia contest was the brainchild of (Vaudeville Vixen) Tipsy Velvet, (penalty box manager) Roy Baty, and (lead statistician) c4, all of whom are members of our Web committee. Right now, we get about 10 responses per bout, but we're looking to change that by promoting it more aggressively on our Facebook page and Twitter feed.

Do you have a special message to your fans?
THANK YOU!!! Thank you for voting us Madison's Favorite Indoor Spectator Sport in the 2009 Isthmus.com Readers Poll (they didn't have that category in their 2010 poll), for coming to our bouts and helping us outgrow the Exhibition Hall in a single season, for being so friendly when you see us around town, and for loving roller derby as much as we do.