The Angel City Derby Girls have been very busy this past year. They have revitalized their league with a focus on recruitment and training; as well as securing their own warehouse practice space. In a city filled with entertainment choices, ACDG has managed to carve out their own niche, and will host their 2011 bouts at the Culver City Veterans Memorial Auditorium. Learn more about the Angel City Derby Girls... 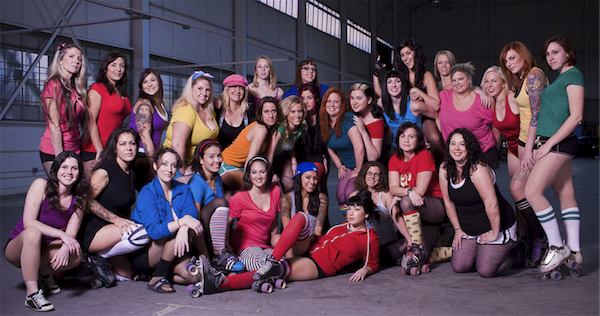 Are you close to any other WFTDA leagues?
The closest WFTDA league to us is the recently accepted Derby Revolution of Bakersfield. We're so proud of DRB and all they've accomplished!

How many skaters/teams do you have? And how is your league structured (home teams, travel team, management)?
ACDG has about 65 members. In the past year we have completely restructured our league to resemble a farm system with five distinct categories of skaters. A typical skater will join ACDG as a Fresh Meat, where she will learn the basics of roller skating including the WFTDA basic skills. Once a skater passes the Fresh Meat program they join the Cosmonauts, where they begin to learn strategy, rules, and bout play. From this level they will move into our Subpool that makes up our Home Teams who play fun bouts throughout the year. If skaters have aspirations to move up into our competitive league structure they can try out for our B-Team, the Rocket Queens, who play other regional B-teams. The highest rung in our farm system is our WFTDA Charter team, the Hollywood Scarlets. These skaters represent ACDG and play regionally for WFTDA ranking. 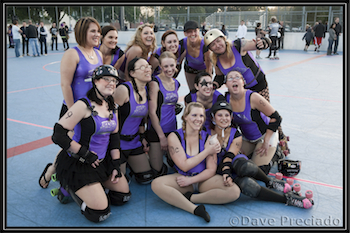 How many days a week do you practice?
We have daily practices at our warehouse and girls are required to attend three a week.

Do you have any sister leagues you’d like to give a shout out to?
Much respect to our cross city banked sisters the LA Derby Dolls! We also heart Central Coast, OC Roller Girls and DRB.

What are the individual challenges of your city?
Los Angeles is a very challenging city in which to be a flat-track roller derby league. ACDG is in constant competition, not only with the Los Angeles Derby Dolls and their well-oiled banked track machine, but also with the city itself. On any given night there are thousands of things to do in Los Angeles and the nature of the event life in LA breeds a very short attention span.

What are your biggest training challenges?
The biggest challenge for us has been to lock down a training facility. It is not easy to find a big enough space to fit a track, and real estate in LA is not cheap. It can also take girls up to two hours to get to practice because of LA traffic so there are times when several girls are trapped on the freeways and we have to practice without a full team.

Who are the best "behind the scenes" skaters who make your league run?
Ms. D’fiant is a veteran leader around ACDG. She has helped build our organizational structure and last year spent her maternity leave nailing down our new venue and practice space. Go Go Gidget resurrected our training program from beyond the grave in 2010. Bee A. Frayed "runs the bidness" and without Babyface Nellie we'd never get anything done. We also can't forget about Retro Bruzin' and her amazing recruitment program! If it weren't for her, we wouldn't have any skaters! 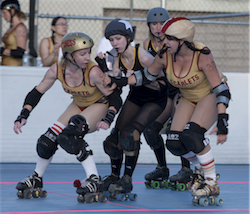 Who are some of your star on-track skaters and why?
No one girl can do it on their own, but some stand out players are: Shiv who is a superb blocker. Ghetto Fabu-Lez is a jammer to watch this season. Duchess Von Damn is deceptively small for how hard she hits. Also, Kristi Yamagotcha is an over-all solid team player and a graceful one at that.

What kind of training/bouting facilities do you have?
We recently started practicing at our very own warehouse space and have booked our 2011 season at the Culver City Veterans Memorial Auditorium. It has been a very long and arduous process to procure both of these venues. The 2010 season was spent moving from outdoor hockey rinks, to parking lots, to parks. We FINALLY have homes and it is such a relief.

We hear your new warehouse is being called "The Ascot". How did you come up with the name, and what meaning does it have for ACDG?
Our warehouse is located on Ascot Street in South Central, LA. We literally drive into the ghetto three to four times a week to play roller derby. An “ascot” is a very fancy kind of necktie that is associated with Dukes and Royalty. We saw it fitting to call our dingy, dirty, graffiti covered warehouse, “The Ascot”. Like ACDG, The Ascot is our diamond in the rough.

From what we understand ACDG has had a lot of skater turnover in the past year. What effects has this had for your league (e.g., benefits, drawbacks)? For the skaters who remain, what keeps them with ACDG?
ACDG faced a lot of turnover in 2010. We came off of our 2009 showing at Regionals with a pretty splintered league. We had made it our goal to get to ’09 Regionals at whatever cost, and we allowed girls to skate with minimal focus on attendance standards or league participation. It has taken a lot of strength to finally make some hard choices and to enforce our standards, even if that means we lose talented skaters. Roller derby is a team sport and we have taken 2010 and re-defined our league with that as our main focus. It has been ridiculously hard, but now we go into 2011 with a practice space, a venue, a huge bump in league membership, and most importantly, with respect for each and every skater, ref, NSO, and volunteer. In many ways 2010 has been the biggest season for ACDG to date.

What kind of recruiting does ACDG do?
This season, Retro Bruizin’ has been one of the most influential members of our league for revamping our recruitment program. She works tirelessly attracting girls on social networking sites, roller rinks, hockey rinks, and out in the public at large. She has created a very educational and welcoming program for newbies.

ACDG is one of LA's very first flat track leagues, and also the only Women's Flat Track Derby Association's member league currently in southern California. What role, if any, has ACDG played in the rapid development of flat track roller derby leagues in California?
Southern California is overflowing with flat track roller derby leagues. There are about 20 leagues within a couple hours drive of Los Angeles. ACDG opens its doors to scrimmage and work with any of these leagues who have WFTDA aspirations. Most recently, we wrote a letter for Derby Revolution of Bakersfield and we're so proud of their recent acceptance as a WFTDA full member league.

How does ACDG promote flat track roller derby in a market that has such an established banked track league (LADD)? Besides the obvious amazingness of flat track roller derby, what draws fans to ACDG? Are there crossover fans with the local banked track action? Does ACDG as a league have a relationship with LADD?
Los Angeles is a very segmented city; this works in our favor when it comes to having two roller derby leagues. Another differentiating factor is our games are all-ages where the Derby Doll games are 21+ only. The few times we've had schedule conflicts with the LA Derby Dolls there wasn't a noticeable decrease in sales. That said, we are quite friendly with the LA Derby Dolls. 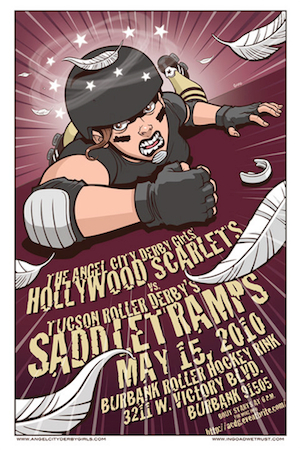 In the past, ACDG had opportunities to help train LADD teams in flat track and last season LADD offered us a practice night when our venue cut us out. Our two leagues frequently participate in pickup scrimmages, fundraisers and social events together.

Your bout posters are amazing! From what we've heard, they are designed "in house" by one of ACDG's own skaters. Is this true?
We have an AMAZING creative department. Jane Dope has long been at the helm of the ship bringing in amazing artists to make our bout posters. She also makes many of them herself and they are just stunning. This season Harass DeVille has been a great addition to the team, and created many memorable flyers for this season.

Do you have a special message to your fans?
Can’t wait to see you all in our new venue!