Formed in 2010, the Lansing Derby Vixens have made it their passion to strive to be one of Michigan's top roller derby leagues as well as support their community. From working hard in the WFTDA community and supporting their junior league, the Vixens have also donated over $60,000 in cash and in-kind donations to local charities and community events. As tournament hosts this month, the Lansing Derby Vixens are eager to show fans and skaters all the excitement and beauty of their home city! Read on to learn more about your August featured league of the month. 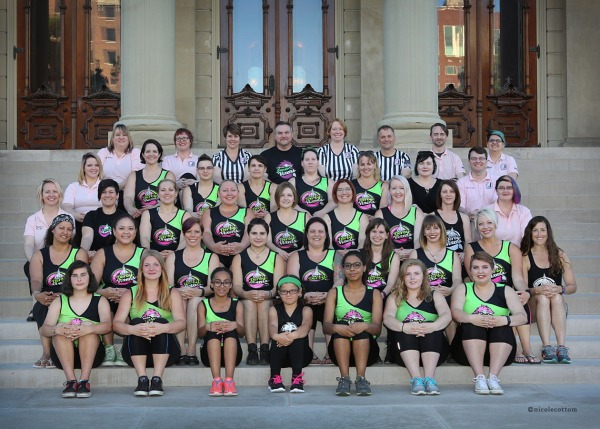 Where are you located?
We are located in Lansing, Michigan.

When was your league formed?
The Lansing Derby Vixens formed in April 2010 as Lansing’s original women’s flat-track roller derby league. At first, league members traveled to the Flint area to train with the Mid-Michigan Derby Girls, while also supplementing their formal training by working at any place they could find, such as Edru (a local roller rink), Foster Community Center and even a high school auditorium stage.

When did you join WFTDA?
We joined WFTDA as an apprentice league in July of 2012.

When did you graduate from the Apprentice Program?
We became a full member league in June of 2013.

How does your season run?
Our season runs from March-October, with a break during part of the summer.

What are the closest WFTDA leagues to you?
We are incredibly lucky to have so many WFTDA leagues and WFTDA Apprentice leagues nearby. Within two hours of Lansing we have the Ann Arbor Derby Dimes, the Killamazoo Derby Darlins, the Detroit Derby Girls, Grand Raggidy Roller Derby, the Battle Creek Cereal Killers, and the Downriver Roller Dolls- and that’s just within the state of Michigan!

How many skaters/teams do you have?
We have 50 skater and non-skater members. 3 travel teams and 3 home teams.

Who is your biggest rival? And have you had any outstanding, memorable moments when you've played them?
We've shared a friendly rivalry with the Ann Arbor Derby Dimes for the past five years. It's not surprising, given the traditional rivalry between Lansing and Ann Arbor! We've exchanged wins and losses between A, B and C-level teams, and each game is a learning experience. We're glad to have such gracious and talented rivals. It's exciting to see A2D2 make division 1 playoffs this year. We hope to join them someday!

Do you have any sister/brother/junior leagues you’d like to give a shout out to?
The entire Michigan derby community has contributed to the success of our league, by being amazing partners in the development of our sport, and by being great competitors.

What are the individual challenges of your city?
Lansing is an amazingly diverse and tight-knit community. However, our community is (temporarily) home to many people who leave after college, or don't stick around after they're done working for the government or auto industry. We are constantly recruiting and looking for new players. Lansing is a great place to live and work - we're also trying to make it a great place to play roller derby! 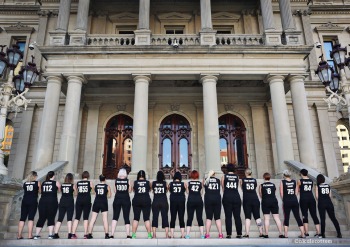 What are your biggest training challenges?
Michigan is a great location for all-seasons sports. This means we have to work around our great summer months, where people want to be boating or beach-combing on one of the Great Lakes. In the fall, we're competing with football and high school sports seasons. Winter poses a number of logistical challenges, but fewer conflicts for skaters.

How many days a week do you practice? How are your practices divided/organized among your teams/skaters?
We practice three days a week (Tuesday, Thursday and Sunday). The entire league practices in the same space at the same time because our practice space accommodates enough room for two full tracks. Junior practice takes place before adult practice.

Tell us about your training facilities.
We currently split our season between the YMCA, Aim High and the Summit Sports and Ice Complex. The Summit has multiple ice rinks, a 50,000+ sq foot Fieldhouse (where we practice and hold games), sports performance center, gymnastic center, and more.

Who are some of your star skaters on the track, and why?
Mullicious Intent is one of our star jammers, who is also an original league member! She's been out after knee surgery, but we eagerly anticipate her return to skating! During her recovery, she's been the bench coach for the LDV All-Stars, and runs amazing practices that challenge skaters to do their best. 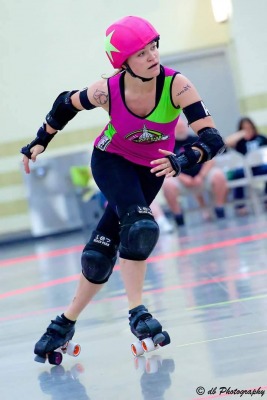 Who are some “behind the scenes” skaters/members who really help your league run?
We have two "dynamic duos" who do a lot for our league. The Sean "Cuzzy Sedso" and Chris "Hiatt Riot" Hiatt duo are coach of the Lansing Junior Vixens and All-Stars captain, respectively. Sean and Chris work tirelessly to support the league, and Chris is known as "Momma Hiatt" to junior and adult skaters alike. Sean and Chris have two adult children who began playing derby as Junior Vixens, and are now members of the adult team!

Patrick "Magic Hanz" and Nichole "Quake" Taylor are coach, athletic trainer, massage therapist and skater/coach respectively. Their dedication to this league keeps our bodies in shape, our benches organized and Quake's hits are legendary! Their dedication and the dedication of their kids (who volunteer at every bout) is so appreciated. Pat's practices are a thing of legend.

What are some of your league's biggest accomplishments?
We've done so much in our relatively short existence. Some things of note include winning the Mitten Kitten tournament in 2012; being invited to many tournaments and invitationals, like B-Cup and ECDX. We came in second out of tens of thousands of applicants in Staples' national "Make Your Idea Happen" contest, winning $15,000 in 2013. We also are incredibly proud to have three double certified officials, as well as having the second most certified officials in the world.

2015 was a very big year for your league: from cracking to top 100 in rankings to competing in your first international bout. Aside from hosting a WFTDA tournament, what were some of the ambitions that you had for this season?
This was a very exciting season for us. Our LDV All-Stars were incredibly honored and excited to play at the 10th anniversary of ECDX, and had a blast. Our LJV All-Stars made the JRDA Nationals in Lincoln, Nebraska for the first time ever. We were also glad to have the opportunity for our C team, Old Town Beat Down to be able to play a game this season, allowing some of our newest skaters the chance to play in their first game ever.

For fans and skaters coming to Lansing for the 2016 International WFTDA D2 Playoffs, what are some of the local sights that shouldn't be missed? Do you have any fun events or activities for fans and skaters during the tournament you can share?
Lansing offer so much for visitors! We have locally owned restaurants like Golden Harvest, which is owned by two of our junior skaters' parents! Golden Harvest is nationally recognized as one of the best breakfast joints in the country. The eclectic spot in Old Town Lansing is known for long but worthy waits, amazing food and creative decor.

We also have many historical sites. The Michigan Capitol building underwent an incredible transformation years back and we're also home to the Michigan Women's Hall of Fame. The R.E. Olds Museum is home to the history of many classic cars in our auto industry town. The Lansing River Trail is an 11+ mile trail that snakes through Lansing and many local communities. It's great for running, walking, biking and skating!

For shopping, Old Town Lansing offers a number of unique and exciting boutiques, including dress and lingerie specialty stores Grace and Curvaceous that cater to patrons of all shapes and sizes.

Lansing is also home to Michigan Pride, which is occurring in Lansing's REO Town neighborhood during the Division 2 playoffs. 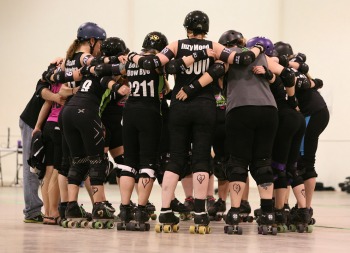 Your league has really made charitable giving in your community the heart of all you do. To date you have given over $25,000 in cash and in-kind donations to local charities! What are some of the charities that you have supported and how have you been able to leverage your league's talents and passion in this effort?
We have many charities that are near and dear to our hearts, however EVE- End Violent Encounters really stands out.

Who are some of your favorite sponsors?
We have so many wonderful sponsors- to name a few: Signarama, Unodeuce, Golden Harvest, Gravity Works, Annabelle's.

Do you have a special message for your fans?
Thank you for your loyalty and support. Your enthusiasm for our league and this game keeps us going every season. Thank you for buying tickets, attending our events and cheering us on!