Celebrating their 10th anniversary this year, the Detroit Derby Girls are looking forward to another decade of representing the highest level of game play on the track, as well as continuing to engage in the greater roller derby community off the track. Taking home a 1st place finish at the 2014 Division 2 WFTDA Championships, learn more about the league’s ambitions for 2015 and beyond!

Where are you located? Detroit, Michigan!!!

What are the closest WFTDA leagues to you?
In Michigan we are close to the Ann Arbor Derby Dimes, Lansing Derby Vixens, Grand Raggidy Roller Girls, Killamazoo Derby Darlins and new apprentice league the Battle Creek Cereal Killers. Our closest Canadian friends are the Boarder City Brawlers, and just south of us in Ohio we have NEO and Glass City!

How many skaters/teams do you have?
We have about 100 skaters, 5 home teams and 3 travel teams. Our home teams are: D-Funk Allstars, Detroit Pistoffs, Devil’s Night Dames, Grand Prix Madonnas, and the Pistolwhippers. Our travel teams are the Detroit Derby Girls Allstars, the Motor City Disassembly Line and the Motown Wreckers.

How is your league structured (home teams, travel team, management)?
We have 5 home teams and 3 travel teams. The Allstars (the “A” team) and the Motor City Disassembly Line (the “B” team) hold annual tryouts and have structured seasons while the Motown Wreckers function as a “pick up” team with a fluctuating roster. 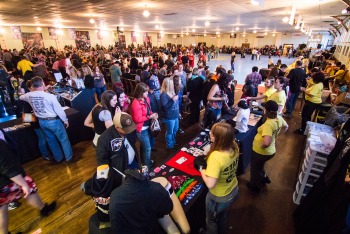 Who is your biggest rival? And have you had any outstanding, memorable moments when you've played them?
Since we have been all over the map the past few years, both geographically and through the rankings, any old rivalries we had have really vanished.

Do you have any sister leagues you’d like to give a shout out to?
We’d like to give a shout out to the Michigan derby community as a whole. We experienced so much support from all the leagues in our state throughout our playoffs run. Derby in Michigan is in a great place right now and we hope to continue to be a pillar in the Michigan derby community for many more years.

What are the individual challenges of your city?
Our city is in a very unique period of restructuring and growth right now. We think the rollercoaster that our Allstars have been on really reflects what is happening in the city as well. Overcoming people’s opinions of Detroit and getting them to come see a game and see the city the way we do is our biggest challenge. Detroit is loaded with local art galleries, entertainment, microbreweries, distilleries, and amazing restaurants. Many of these places are our sponsors and we are happy to be a small part of drawing fans to downtown Detroit to experience some of the amazing things this city has to offer.

What are your biggest training challenges?
Our biggest training challenges ultimately stem from our growth. We think we are finding ourselves in a transition period. Derby used to be just a “hobby” but now to be competitive it requires many more hours of practice. With 5 home teams and 3 travel teams, time and space are our biggest enemies. Along with that, blending new skaters with 10 year veterans creates the need for many more levels of organization. While you want the newer skaters to learn from the vets, you also want to continue to challenge the vets… so finding ways to do both with limited time and space is difficult.

What kind of training/bouting facilities do you have?
We are so lucky to call the Masonic Temple home. It is a really cool venue with amazing history and architecture and makes for a great atmosphere. We practice in the same space where we host our games, the Masonic Drill Hall. We also have a secondary practice location at Riverside Arena, a local skating rink.

How many days a week do you practice? How are your practices divided/organized among your teams/skaters?
You will find Detroit Derby Girls practicing at one or both of our facilities 6 days a week. On Wednesdays we have league practice where we all practice together, the other days are divided up equally between the teams. When the home teams take their summer break, the travel teams practice 3-5 days a week. 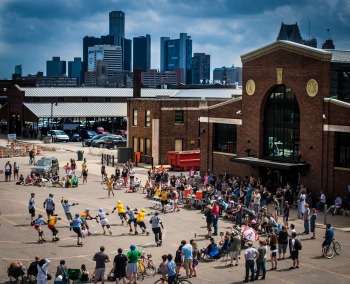 Who are some “behind the scenes” skaters/members who really help your league run?
We wouldn’t be half the team we are without Speedy. He is our “league coach” and has been the Allstars manager for many years (104 sanctioned WFTDA games to be exact!). He is a national speed skating champion, US Coach of the year, had athletes in the Sochi olympics, and is in the roller skating hall of fame as both an athlete and a coach… it doesn’t get any cooler than that!

Who are some of your star skaters on the track, and why?
Racer McChaseHer is probably our most well-known skater. Some of her career highlights are 2007 Eastern Regionals (Heartland Havoc) MVP; October 2010 WFTDA Featured Skater; 2011 Team USA World Cup Alternate; and 2014 WFTDA Division 2 Playoffs in Duluth Minnesota MVP. Lazer Beam and Feta Sleeze are also becoming well known as being jammer/blocker double-threats.

WFTDA's current president, Alassin Sane, recently transferred to Detroit from the Atlanta Rollergirls. What is it like to have the President of WFTDA as a member of your league?
One of our goals as a league was to be more involved with WFTDA so her transfer was very exciting for us. Lass has been a great addition to DDG. She’s very professional and keeps her role as WFTDA President separate from her role as a Detroit Derby Girl. She is great to have around when you’ve got a question though!

Congratulations on your 10th Anniversary! Formed in January 2005, what advice to you have to new leagues on developing the longevity that you have?
Thank You! We think the most important factor in our success as a league is that any decision we make is for the good of the league as a whole. LEAGUE before TEAM before SKATER! Also, I think it is important to embrace change. Our board of directors has a policy that “that’s the way it’s always been done” is not a reason for doing something. We try to challenge ourselves and our leaguemates to have sound reasoning behind all of our business decisions.

Congratulations on your 1st place finish in the 2014 Division 2 Championships! What were some of your most memorable moments? What lessons did you learn from this year that you hope to guide you to victory in the new year?
Division 2 playoffs were such an incredible experience. We were disappointed in ourselves as a team for falling out of D1, but the skaters and teams we met throughout D2 were truly inspiring. Excellent sportsmanship does not begin to describe these athletes. After we won our playoff in Duluth, the other teams gave us a standing ovation as we entered the after party venue… It was so genuine and moving. A moment we will never forget. Sometimes, the D1 tournaments can get very serious and highly competitive. While competitiveness is good, the atmosphere of the D2 tournaments was a great reminder of why we all play this sport. We think it really reinvigorated the team and helped us find some of the passion we had been lacking. As far as lessons… we definitely learned a bit about the ranking system!

How does your league give back to the community?
Our league selects one charity each season to donate to. The selected charity and the Detroit Derby Girls work together all season long to promote the charity and fund-raise through raffles at every home game. This year’s charity is the Detroit Bar Association Foundation. Past charities have included Downtown Youth Boxing Gym, Urban Neighborhood Initiatives and Big Brothers Big Sisters of America. 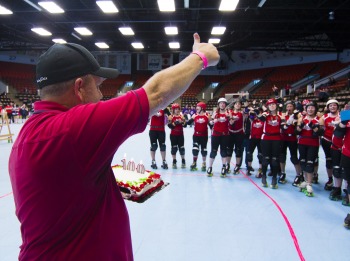 Do you have any big fundraisers coming up?
Every summer the skaters on both the A and B teams participate in a “skate-a-thon” where they raise funds to help support their travel costs. Make sure you "like" our Facebook page for opportunities to donate!

Who are some of your favorite sponsors?
We have such a wide variety of sponsors at DDG. We are very lucky to be sponsored by the Metro Detroit Chevy Dealers this year. They are our presenting sponsor and we were even featured in a Chevy Malibu commercial! Another new sponsor this year is B. Nektar Meadery, where some of our leaguemates and fans gathered for playoff viewing parties. And we are forever grateful to Dr. Robert Burns at Novi Doctors of Physical Therapy, for fixing all of our broken parts! We have somewhere around 30 sponsors and the list is continually growing.

Do you have a special message for your fans?
Yes! THANK YOU THANK YOU THANK YOU!!! We are so lucky to have so many loyal fans. Without our fans, we don’t exist. We consider them a part of our DDG family and look forward to 10 more years together!