The Killamazoo Derby Darlins joined the WFTDA as a full member league in 2010. Since then, they have been working hard to build their reputation as a tenacious and fun-loving team both on and off the track. In August, KDD will host the WFTDA’s first ever Division 2 tournament, and they also hope to be on the track competing. Read on to learn more about their plans for hosting the WFTDA, and book your tickets for Kalamazoo for August 23rd to 25th.

What city are you based in? Kalamazoo, Michigan

How does your season run?
Our season is all year round, with a short break between Thanksgiving and New Year’s and a couple of weeks off in the summer.

What are the closest WFTDA leagues to you?
The Detroit Derby Girls are nearby in Detroit, Michigan and the Grand Raggidy Roller Girls are in Grand Rapids, Michigan.

How many skaters/teams do you have?
Our league has 38 active skaters on two teams. 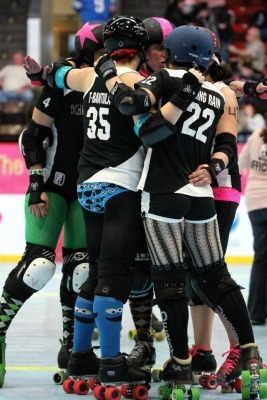 How is your league structured (home teams, travel team, management)?
We have our WFTDA-chartered team (the A-team) and a B-team, named Killa Crew.

What are the individual challenges of your city?
There are several roller derby teams in the area, which is great for the sport; however some people do get our teams confused with teams from the other leagues. The other issue is visibility – there are still people in Kalamazoo who don’t know they have a roller derby league in their city.

What are your biggest training challenges?
Space. A regulation track just fits into the skating surface at our practice venue. Because of the tight space, no hard hits to the outside are allowed between turns two and three.

What kind of training/bouting facilities do you have?
We practice at Rollerworld (a roller rink) in Kalamazoo and hold our games at Wings Stadium (a hockey arena).

Who are the “behind the scenes” skaters who make your league run?
We have so many skaters working behind the scenes that help make Killamazoo the best organization it can be. Everyone pitches in and does extra work outside of practices to attend events, find sponsors, and create a brand that Kalamazoo can be proud of. 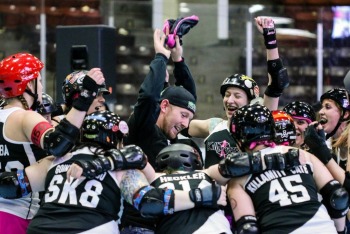 Who are some of your star skaters on the track, and why?
It’s difficult to give accolades to individual members or support staff. We are not a particularly large league and so many of our accomplishments have been a result of everyone’s hard work and extra effort.

What next big bout are you most looking forward to and why?
Aside from hosting one of the WFTDA Division 2 tournaments, we are hoping to actually play in it as well. It will be an opportunity to play teams that are ranked closely to us that we might not otherwise have a chance to play.

Congratulations on your selection to host the WFTDA’s first ever Division 2 tournament this August 23-25! You are involved in making WFTDA history! How did your team decide to take on this challenge?
We have a great venue for our home games (Wings Stadium) and feel that we run a solid production. KDD felt that our venue would be a good fit for a tournament and originally applied for a regionally based tournament, previous to the WFTDA’s restructuring to divisions. We didn’t get chosen at that time, but were encouraged to apply again when the WFTDA decided to hold the first Division 2 tournaments.

What can the WFTDA expect from a Killamazoo Derby Darlins’ hosted tournament? Are there any exciting plans you can share with us at this time?
We think that visiting skaters and visiting fans will be pleasantly surprised at some of the things we have planned. We’re looking forward to really showcasing what Killamazoo and Kalamazoo are all about (hint: we were just named runner-up in the Beer City USA contest, if that gives you any idea of what we might be planning). 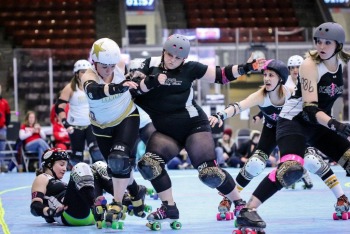 How is your league involved in planning to host the tournament? Are there any skaters or league members who deserve special recognition for their work so far?
Really the entire league deserves a huge thanks for their efforts to bring the tournament to Killamazoo – and for all of the hard work they’re about to put in to prepare for the tournament!

We hear you’ve been spreading the good word of derby to school children in your area. Please tell us how you had this opportunity, and what the response was to your presentations.
The father of an avid 9-year old derby fan (Kayleen, now named Killeen) contacted us through our team’s Facebook page, looking to do something special for her 10th birthday. We surprised her by incorporating her into our Killa Crew’s introduction, we included a birthday graphic on the scoreboard, she received KDD swag, and we brought her with us into the locker room before, during, and after the game. Kayleen later did a presentation on roller derby at school, which then turned into an invitation to speak to first through fourth graders. Five of our members took time from work to travel and speak to approximately 500 elementary school students about teamwork, sportsmanship, and the importance of getting up after a fall. We gave out KDD buttons, skating passes to Rollerworld, and tickets to our next home game. The response from the school office and the children was very positive.

What else do the Killamazoo Derby Darlins do to stay connected to your community?
We participate in the holiday and Do-Dah (Parody) parades in Kalamazoo, feature a “Pup of the Game” from the local ASPCA at our home games, and participate in Kalamazoo Pride Day. We recently participated and raised funds for the EZ Memorial Run in honor of Kalamazoo Public Safety officer, Eric Zapata. Starting this summer season, we will have a featured charity for each home game. The featured charity for June’s game is Loaves and Fishes, a local food assistance program.

Please tell us about your annual Zombie Prom fundraiser. This sounds like fun!
Zombie Prom is our biggest fundraiser held annually in May. We invite fans and friends to our prom, dressed in their zombie best. An appointed committee chooses a king and a queen and it’s always fun watching fans and skaters compete for those titles. This past year was our 6th anniversary and we’re looking forward to putting on Prom 7 next year. It really is a great time for league members and fans alike. 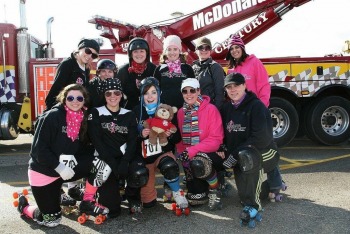 Do you have any big fundraisers coming up?
We are in the process of working on a fundraiser with Noodles & Company KDD will partner with Noodles & Company on June 21st for an exciting fundraising event. The event will take place at Noodles & Company on Westnedge in Kalamazoo for seven hours during which we will be promoting our June 22nd bout by selling tickets and merchandise, and delivering food to the tables while wearing skates and our team uniform. We'll also be hosting raffles with one of the prizes being “free noodles for a year.” Part of the fundraising contract with Noodles includes 20% donation of all sales made to KDD. This event is sure to raise money, ticket sales, and derby awareness, as well as challenge skaters who might have always had dreams of being a skating soda pop girl of the ’50s.

Who are some of your favorite sponsors?
Noodles & Company, Corey's Bootery, and The Back Alley

Do you have a special message to your fans?
We’ll take this opportunity to thank our fans for all they have done and continue to do for the league. Their support means the world to us and we can’t wait to show them the excitement of a larger roller derby tournament in August – WFTDA’s first ever Division 2 tournament in Kalamazoo from August 23rd to 25th.