Named MVP at the 2015 International WFTDA D1 Playoffs in Dallas last month, Scald Eagle has been captivating the derby world with her strength, speed and style on the track. Sporting her signature war paint, Scald Eagle has been a domineering force on the track and is eagerly anticipating the competition that awaits next month's WFTDA Championships in St. Paul, MN. Learn how Scald Eagle is preparing and what she's looking forward to when facing off against the best in the world! 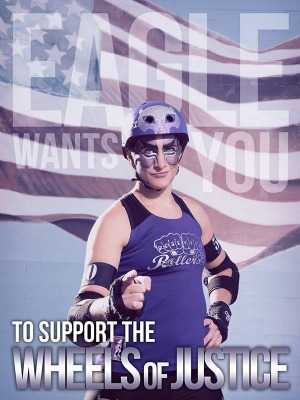 What is your derby name? Scald Eagle

Please explain the inspiration and story behind your derby name.
I played ice hockey for years before derby, and my nickname in hockey was Condor! I decided to keep on the bird theme as I entered derby, and came up with all sorts of fun derby bird names. Some of my favorites included, Puffin My Chest, AWEsprey, Gold Pinch, Turkey Jerky, Raptor Thighs, and Condor Thunder! In the end I figured more people knew of eagles than they knew of condors and so came up with Brawld Eagle...I decided that that didn't roll of the tongue well though, so I migrated to Maul'd Eagle..but the "m" seemed too soft to me...from there I finally landed on Scald! and I was like Yeah! Nice sharp sound, and I'll be so fast I'll burn ya! I can do a pretty good eagle scree and I happen to be proud to be an American too. All in all its been a great fitting name for me. #derbynamesforlife ...can you imagine the announcers trying to pronounce Buscovick...#Nope!

What is your home league? Rose City Rollers

Which team(s) do you play on?
I played with my home team Guns N Rollers for four years and went travel team only at the beginning of this year. I'm honored to skate for the Vagine Regime, Team USA, and the Wheels of Justice.

What is your skate gear of choice?
I am a Bont Buddy through and through. I skate on the Bont Hybrid Carbon boots, 20 Degree Infinity plates, FXX wheels and 167 Bearings. I also dig my S1 helmet, 187 Pro Derby Kneepads, my Elle wristguards, and because I chipped my elbow while drunk wrestling ChestNutz at our team retreat, I now wear and LOVE my Reebok ice hockey elbow pads! ...she won.

Do you have a pre-bout ritual?
Oh definitely. I take thirty to forty-five minutes to apply my warpaint before every bout. I blast some serious tunage, I dance/bounce around, and I do a lot of visualizations to prep myself for the game. I always slam a cranberry Red Bull and a Cucumber Lime Gatorade before gameplay too.

What do you think about when you're lacing up your skates?
Not too tight, not too loose.

Do you have a favorite motivational quote?
The number one thing I learned from my derby wife; "There are two types of people in the world. There are Do-ers, and there are those that know the Do-ers will do..." I pride myself on being a Do-er. Do you have a theme song?
This year it's Sia's "Chandelier (Plastic Plates Remix)." Every time I hear the chorus I imagine myself jumping the apex while swinging one handed from a chandelier!

How did you get involved with roller derby?
In June of 2010, "Whip It" showed up on my doorstep randomly... I never put that movie in my Netflix Queue... but it showed up nonetheless, and so I watched it... I instantly knew that derby would be right up my alley...that is, If roller derby was real! I came away from that movie thinking "ah well that's Hollywood, there's no such thing as roller derby." I don't know what compelled me, but two weeks later, I Googled, "roller derby Portland Oregon" and Boom! Rose City Rollers shot right up … the rest is history!

What is your pre-derby sports/skating background?
I grew up in Gunnison, Colorado, noted for its extremely cold temps and Ice hockey culture. I've been Ice skating since I was three or four and started playing competitive ice hockey when I was ten. I love team sports and have tried them all. By high school however, I narrowed it to fast-pitch softball and Ice hockey. I was a catcher in softball and a center in hockey. Skill sets that I think greatly lent to my growth in derby.

Please tell us about your rookie year and how you learned to play roller derby.
Within three days of discovering RCR, I owned a full set of gear and was kinda doing the "Whip It" thing on the streets of Portland after work. I watched you tube videos on how to transition, how to tomahawk stop, and how to power slide. On August 12th, 2010 I tried out for the RCR's Freshmeat program. I knew no one, and cannot remember a time in my life that I've ever been more nervous. I recall having the most incredible cottonmouth.

I got drafted to RCR’s home team, Guns N Rollers, in January of 2011, made the Axels of Annihilation in February, and got pulled up to Wheels of Justice in March! By the end of the year I was named the Bridgetown Brawl Western Regionals MVP and was voted Rookie of the Year by DNN.

I owe so much to the Freshmeat coaches of that era and to the 2010/2011 Wheels of justice skaters for teaching me so much so quickly. 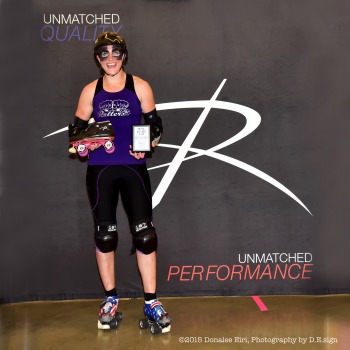 What is your position of choice? Jammer

What is your signature move?
I think my juking moves probably help me the most.

How would you describe your derby playing style?
I asked my teammates and they came back with jukey, drunken line master, creative, toe-stoppy, powerful, and animated.

Congrats on being named MVP of the 2015 International WFTDA Division 1 Playoffs in Dallas! What were some of the most memorable moments of that weekend for you and your team?
The Texas game was a total blast and absolutely a challenge. I was so impressed with our blockers' ability to kill power jams against us and capitalize on the power jams for us. There was also one moment in particular when I took a critical shirt whip off my sister Brawn Swanson. We now call her “The asSister!”

The next stop for the Rose City Rollers is Championships in St.Paul, MN November 6-8th. How are you preparing for the big weekend and what do you think fans can expect to see from your team?
We are ratcheting up the intensity at practice. Our defense has progressively gotten so strong, but I think the derby world will be most impressed by our offensive tactics and execution.

Please share your best derby moment (or moments).
In April of 2012, Wheels of Justice played Windy City in Portland’s Memorial Coliseum. In a crazy last jam I managed to pull some moves in conjunction with some great offense from my blockers that not only resulted in a 20-point jam but also clinched victory by three points! I will never forget the exhaustion and the elation of that moment. I will never forget JK Rolling (Jamie True) whispering in my ear “You got this, Just one more pass!” as she assisted me up the inside line, nor the ecstatic look on Lobster's face as I came around the bend and he had me call it off. That was a great day.

Fans have been able to see even more of you skate as a member of Team USA. What has the experience of being on Team USA taught you about derby and yourself?
It reaffirmed how important is that we continue to share information and skills globally. Its really important that we continue to elevate the level of competition world wide. I'm proud to be on the forefront of that. 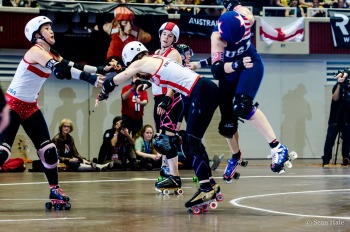 What are some of your greatest roller derby accomplishments on the track?
There is nothing that can compare to representing one's Country and hearing one's national anthem for the first time after making the team. I am so honored to skate for Team USA.

There is also nothing that can compare with coming back from severe injury. Breaking my ankle in 2012 was a major ordeal for me. That process completely changed my outlook on athletics and my mental game. I now never take any of “this” for granted, and feel so grateful to have made it as far as I have since that happened.

Off the track?
I am fortunate to have so many opportunities to coach externally. It has been extremely fulfilling, and made me really proud, to see how far some of the leagues and individual skaters I've worked with, have come.

Who are your derby heroes?
Blockers ping off her like 1/8 inch hail pings off a Ford F-350 barreling 80mph down the highway...her matrix moves on the lines astound me and prove to me that I need to be doing ten times more core than I do, although her dry British wit always gives me a solid workout, my derby hero is the indomitable Stefanie Mainey!!

I admire the heck out of Untamed Shrew, Brawn Swanson, and Demanda Riot, all of whom, have had significant impacts on my derby life.

Fifi! You are working your way up there…Get me a packet of Fun Dip and maybe I will re-asses!

How has your involvement in roller derby affected the way you live the rest of your life?
Hahahaha 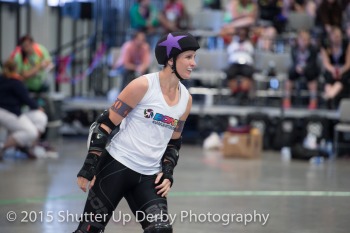 Photo by Shutter Up

How do you find a balance between your derby life and your “real” life?
I don't. I'm all derby, all day, errry day! I think I might be a lifer at this point. I have totally been that person that prioritized new wheels over gas money or food.

What advice do you have for people who want to play roller derby?
Roller derby is intense. You have to be equally up to the emotional and mental challenge as you are the physical challenge.

When you're not racking up points on the track as a jammer, you work very diligently to coach other skaters. From a coaching aspect, what do you think are some of the most important skills for skaters to work on? What are some ways that you train yourself that you also teach to skaters?
Confidence is key. True confidence comes from a deep awareness that one has made an effort to gather information, turned every stone, done everything to practice the craft and get strong. Anything I can do to help players out there learn new things that will help them feel more secure in their skill sets, is one of the reasons I love to coach.

Do you have a special message to your fans?
We are often asked, "Why do you play roller derby?" I love Roller Derby for the relationships. Winning is nice, but means are as important as ends to me, and all of the struggle and hard work are far more fulfilling with others to share the experience with. My games and practice won't last forever but my friendships will.

Is there any other information we haven't covered in the previous questions that you’d like to share with the wftda.com readers?
I would love to thank my Sponsors who support me in all that I do. I couldn't perform at this level without you. Thank you! Bont, Left Turn Clothing, Sin City Skates, and S1 Helmets.