If you have been around roller derby for a few years, you will have heard of Snot Rocket; and if you are newer to the scene you will know her as Kelley Young. This Kansas City Roller Warrior All Star is known for her ability to slip through a pack, and showed us all that she's still got the right stuff by contributing to her team’s exciting performance, and earning MVP of the 2011 WFTDA Championships. Learn more about this talented and modest roller derby skater here… 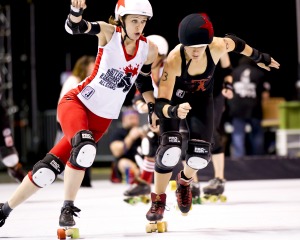 Home league: I have only ever skated for Kansas City Roller Warriors, and I’m proud to say so!

Home Team: I used to skate for the Dreadnought Dorothys. But for the past two years, I have skated as an "All Star-only" for KC.

What is your roller derby playing position of choice?
Jammer

What is your skate gear of choice?
I wear Pro-Designed pads, Reidell skates, and bungapads for my feet.

Do you have a pre-bout ritual?
I just try to do the basics pre-bout – drink lots of water, get plenty of sleep, get warmed up, and stretched well right before the game.

What is your favorite derby moment?
My best derby moment is the last tournament I played, the 2011 WFTDA Championships, because I feel satisfied that I finished my derby career strong. This will be one of the most satisfying and long-lasting impressions when I think back.

Who are your derby heroes?
My teammates are my derby heroes, seriously. Bruz-Her especially for her skill, dedication, and her personal strength.

What do you think about when you're lacing up your skates?
When I'm lacing up my skates, I'm always thinking about how comfortable I can get my feet in my skates.

Do you have a theme song?
"Daylight" by Matt and Kim, because it's so happy energetic. 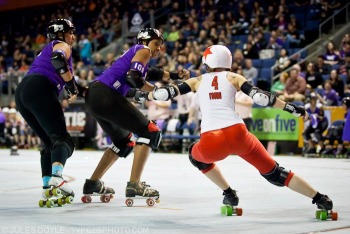 Do you have a signature move?
This year, I've developed my spin-around-get-my-hips-past-the-blocker-to-get-her-point-even-though-I-can't-get-completely-around-her move.

How did you get involved with roller derby?
I've been skating with KCRW since 2004, the year the league began, and I played my first game in 2005. I got involved because I heard about it through flyers at a show and radio spots, then went and attended a recruiting event and found out that some of my acquaintances had been skating. I just signed a waiver and started going to practices…that was before there were tryouts, ha!

How did you come up with your derby name?
I started out with the name Snot Rocket, as a joke during a St. Patrick's Day parade that we were skating. I was blowing snot rockets because I didn't have any tissues. I liked the "rocket" in the name mainly, but it was also kinda funny. I skated as Snot Rocket until the end of 2008, when I retired. When I came back after a year in retirement, I decided to use my real name because there had been a lot of hype generated around "Snot Rocket" that I wasn't interested in trying to live up or answer to. I just wanted a clean slate. And also to come back with more of a reminder of just being myself, without some persona.

Any advice for girls who want to join roller derby?
Spend as much time as you can on your roller skates, and perfect your form early (if you don't have a skating background).

We understand that you have already taken a break during your derby career, having retired at the end of 2008 and returning to KCRW for the 2010 season. What made you return to roller derby? Can you talk about your experience of returning to competitive play after an extended break? And how much longer do you anticipate continuing playing the sport of roller derby?
Yeah, I didn't skate the 2009 season…I wasn't sure if I had retired for good, but I was sure that I couldn't skate that year at least. What motivated me to come back to the sport was I was in Spain on a summer-long study trip, reading the textcast of KCRW playing Cincinnati Rollergirls, I think. It was a close game, and I had thoughts of wishing I could have been there playing with my team. That was the catalyst for realizing I still had some left in me, and eventually deciding to go back and play again.

How would you describe your derby playing style?
I think I'm kind of clumsy and wiggly. I just try to be fast and slip by my opponents any way I can with my little body.

What is your pre-derby sports/skating background?
Roller skating is the only sporty activity I've ever been skilled at. But I also played basketball, tennis, and ran track...all not very seriously or successfully. 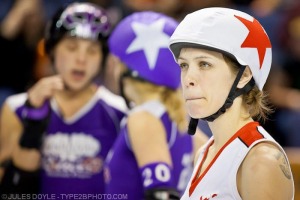 What are some of your greatest roller derby accomplishments on the track?
My team won the WFTDA Championship in 2007. A personal accomplishment was setting a record for scoring 17 points in one jam (I think that was it, back in the mid-2000s), then tying the record for 25 points in a jam, in 2008. That one was particularly special for me, because I was tying the record Kamikaze Kim set playing for the team that knocked us out of a Championship tournament spot the year I was retiring.

Off the track?
My greatest accomplishment off the track is completing my Master’s degree and doing the job I love: teaching Spanish at a university.

Can you talk a bit about your rookie year and how you learned to play roller derby?
My rookie year was mainly just having fun and doing whatever the league and teams needed: refereeing, playing for expo teams, or just going to practice and skating as hard as I could. There wasn't anything particular about how I learned to play derby in my first year…learning to play derby has been a continuous process throughout the years.

What advice do you have for other jammers who aspire to play like you?
Have fun and experiment – learn to jump well; spin around; do drills skating backwards, including blocking. Spend as much time on your skates as you can, doing atypical things, but also just being as explosive as you can with your sprinting and then stopping.

Congratulations on being named MVP of the 2011 WFTDA Championships! What does it mean to you to have been selected by the other teams competing at Championships?
It is truly an honor. There were so many amazingly talented skaters at the tournament, deserving of the title. It felt wonderful that I was the majority's selection. It also meant a lot to me personally, because I know that I finished out my derby career strong (I am retired now). I feel so blessed to have finished my derby career with the way that my team and I performed at the tournament.

When you were announced as the tournament MVP, and asked to say a few words, you thanked your team. How has your team contributed to your experience of roller derby, and to your performance at the 2011 WFTDA Championships?
Yeah, I really should have explicitly thanked those who selected me, and said that I felt honored, as I did very much. But I thanked my team because they are the reason I ever got to that point. I just wouldn't be the skater I am without them…not without the moves that my awesome teammates make in the games, nor without the many hours we spend practicing together. It wasn't really just me that won that MVP title…I feel like it was my team. We didn't place in the top 3, but we were so proud of how we shined together that weekend. 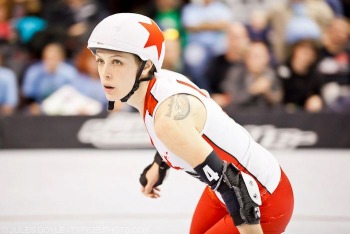 In one of the most exciting games of this year's Championships, you scored a 25-point jam against the Oly Rollers. How did you prepare – physically and mentally – for a game against a team that had only lost to last year’s Championship winners, the Rocky Mountain Rollergirls? How do you feel about how you played in the game against Oly?
We prepared for Oly the same way we prepared for any other team…just practicing hard. It was helpful that we had played them earlier this year in Olympia. I feel that we played very well against them. We had good defense against their highest scoring jammer, and just a strong game all around, even without one of our best jammers: Track Rat.

The Kansas City Roller Warriors and the Texas Rollergirls have a long history in Regional and Championship play, and you’ve been on the track for the majority of those bouts. Can you please talk about the rivalry between the KCRW All Stars and the Texecutioners? How did the All Stars prepare for the potential to play the Texecutioners again in 2011?
Our rivalry with TXRG is interesting, because they were our big sister league in the early years. We have always been motivated (and aggravated, haha) by the Texecutioners. Games against them are always a monumental victory or enormous disappointment. We prepared for playing them again by regrouping our teamwork, perfecting our slow game and dealing with jammer-line-start-strategies.

How did you, as a jammer, prepare for that game? What changes in game play have had the most effect on your experience of roller derby since your return?
I tried to work out difficulties with starting a jam with a wall right in front of me. I also practiced being more defensive as a jammer. The game play that has had the most effect on my derby experience since I returned, is definitely slow-play strategies and having to harness a full-speed sprint while approaching a basically stopped pack.

As MVP of the 2011 WFTDA Championships, you have won a well-deserved trip to Cancun, México from WFTDA sponsor, Union Vacations. Who will accompany you on this trip? What are you looking forward to doing in Cancun?
I feel so blessed to have been recognized as MVP, and with this prize!!! My beloved boyfriend, Griffen, will be going with me. Of course, I am looking forward to spending time on the beach…Griffen and I love the beach. But I'm also looking forward to just going to México, because I've always wanted to go. I teach Spanish for a living. 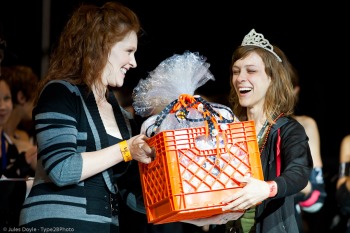 Is there overlap between your work and roller derby? How, if possible, do you achieve balance in your daily life?
I teach Spanish at a university where the students probably think that I'm their age, because I'm less than 10 years older than most of them and look about their age. In order to keep a certain distance, I try not to divulge my derby life to them or my colleagues in general…so, I would say my work and derby life are very separate. I achieve balance by keeping my priorities straight.

Do you have a special message to your fans?
Thanks to the old (who remember me as Snot Rocket) and the new (who have only been told)…you guys are so sweet for paying any attention to me at all.

Is there anyone that you’d like to thank?
I'd really like to thank my dear Griffen, for supporting me even when it was hard this year and we didn't get to spend as much time together as we deserved. I'd also like to thank my mom and dad – my most dedicated fans. They have been such a consistent presence throughout my derby, and I really appreciate it.