Since their formation in 2006, Terminal City has been fused on providing their members with fun, competitive game play and their fan with athletic entertainment that benefits the community as a whole. Pulling double-duty as Hosts and competitors at this year's D1 Playoffs, its not hard to see the passion and ambition Terminal City has in all aspects. 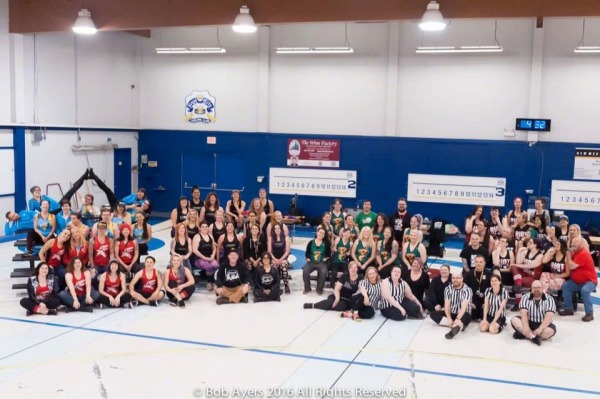 Where are you located?
Vancouver, British Columbia, Canada.

When was your league formed?
2006. Right now we're celebrating our 10th anniversary season!

When did you graduate from the Apprentice Program?
2011

How does your season run?
Our house team season runs from March to July and our travel teams are usually playing in tournaments until late September, early October. 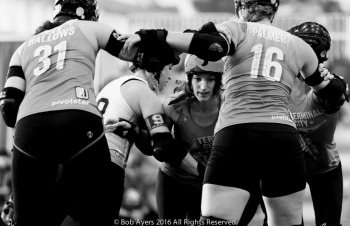 What are the closest WFTDA leagues to you?
The Mainland Misfits are just around the corner and the Bellingham Roller Betties are just south of the border.

How many skaters/teams do you have?
We have over 100 skaters on 6 teams.

How is your league structured (home teams, travel team, management)?
We have 4 House Teams competing yearly for the Mercury Shield. From these 4 teams, the best and brightest are chosen for our feeder travel team - The B-Side, who play and train at a higher level in hopes of progressing to the Terminal City All Stars. The league is managed by a board of directors and run by a bunch of extremely hard-working department heads.

Who is your biggest rival? And have you had any outstanding, memorable moments when you've played them?
Rat City have always kind of felt like our cooler older sister, you know? For years they'd invite our house teams down to play in Key Arena when they were pulling in record crowds and it really felt like the big leagues. They pushed us to play better and put on better shows. Last year the Terminal City All Stars beat the Rat City All Stars for the first time at home. It was a really big deal for us!

Do you have any sister/brother/junior leagues you’d like to give a shout out to?
The Mainland Misfits and the NWO Rollergirls are our family! We trade a lot of players back and forth and have more scrimmage time against Mainland's Anarchy Angels, Smokin Laces and Doomsday Bunnies and NWO's Wolfpack and Outsiders than any other teams.

What are the individual challenges of your city?
As with everyone in Vancouver, we have a lot of trouble finding affordable accommodation. We have been working hard to find a permanent, dedicated practice and game space for as long as the league has been around, but it is an expensive city. Luckily we have an amazing home in the summer at the Royal City Curling Club when the ice is melted. What are your biggest training challenges?
We've recently seen a downturn in recruitment and fewer new skaters turning out to our Fresh Meat program and entering the league. It's meant that a couple of our house teams have been pretty short in numbers this year. To combat this we've just launched a brand new year-round intake and training program for brand new skaters called the Terminal City Mix Tapes. We're super excited to have fewer barriers for new skaters to enter the league!

Tell us about your training facilities:
In the summer we train at the Royal City Curling Club in New Westminster. You can't curl without ice, so we happily make use of their concrete surface until curling season comes back! In summer we train on asphalt with a chalk track at the University of British Columbia - it's a rough surface but we love it because it makes us better skaters. We also recently started getting some time at the Poirier Sport & Leisure Complex in Coquitlam which is VERY luxurious.

Where do you hold your public games?
We hold most of our games at the Royal City Curling Club. It's a smaller venue, but we're still able to get some excited fans around the track and more up in the lounge/beer garden. For bigger events like our Summer Slam tournament we'll use the fabulous Minoru Arena in Richmond. 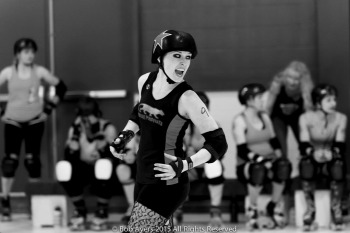 Who are some “behind the scenes” skaters/members who really help your league run?
There are so many! Our Heads of Department put in hundreds of hours every season to make things run smoothly. A league as big as ours often feels like herding cats. Our League Head NSO, Countess Stitch, is also a captain of our Officials and ALSO the league treasurer! Our up-until-recently Head of Live Events, Chic and Destroy put in so many hours to make our league run and our events happen, including our D1 Playoffs this year, it feels like we'd be lost without her!

What are some of your league's biggest accomplishments?
Being one of the first Non-American teams to host a D1 Playoff Tournament was a HUGE accomplishment and the result of literally years of hard work. The first time the All Stars broke into the top 25 was a massive moment and something they'd been working toward and focusing on for a long time. We're extremely proud of our Summer Slamand Derby Night in Canada tournaments and our It's Official training camp.

After a tough battle in September at the D1 Playoffs, you finished at an impressive 5th place. What were some of the most memorable moments from that weekend on the track?
Getting so close, SO VERY CLOSE to winning our first game against Philly to progress closer to a ticket to champs was a rollercoaster of emotions. A huge contingent of league members were cheering and making a ruckus, and so many amazing things happened, they outweighed the disappointments. Sending veteran All Stars and beloved league mates Eve Hallows and Kim Janna off into retirement by winning our game on Sunday was bittersweet. 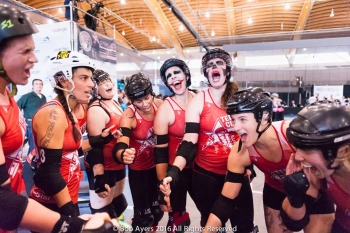 And as tournament hosts, what were some of the most memorable moments OFF the track?
It was mostly just amazing to feel years’ worth of planning and months’ worth of preparation and the work of so many league members and volunteers come to fruition! Seeing the gorgeous Richmond Olympic Oval on show, seeing league mates turn out to work at 7 in the morning and roll with the punches of such a big, complicated event, sitting with folks who'd never seen derby before who were now seeing some of the best in the world. It was pretty amazing!

Who are some of your star skaters on the track, and why?
Brittany Palmer is an absolute monster of a defensive blocker. Get to know her hips, opposing jammers, you'll be seeing a lot of them. Scar, the reigning star pass champion (or as we like to call it, the Scar Pass). Sundown is just as intimidating, with or without her creepy clown makeup. Green Machine is an imposing big hitter, but a surprisingly agile skater, especially for someone who's only been playing derby for 2 years! And Maiden Sane is just a joy to watch jam, her skating is truly beautiful.

Do you have any big games or tournaments coming up that you're really looking forward to? Why?
Apart from the B-Side playing at Hicktown Throwdown in Armstong, BC this October, our season is done! The only big games we're looking forward to are at CHAMPS! Portland is so close to Vancouver a lot of league members are road tripping down to watch.

Congrats on celebrating your 10-year anniversary this year! Looking back at the last decade, what are some of the major changes in your league since that first season?
Thank you! We've gone through a lot of the same milestones as most other big city leagues, growing quickly to meet huge demand and putting on big shows for excited crowds, but as the game of derby became less of a show and more of a legitimate sport, those crowds dwindling. A couple of years ago we made a firm decision to switch focus to the game itself, making smarter financial decisions and gearing our events to be smaller and more easily cash positive. As a league we decided that we'd rather be a sporting organization than an entertainment organization and that change has been hugely positive, saving money on big venues and spending it on practice time. 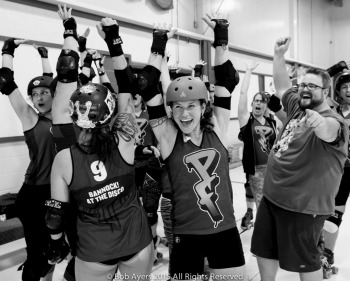 Do you have any big fundraisers coming up?
Like I said our season is over! Lookout for announcements for our tournaments next year, though!

Who are some of your favorite sponsors?
rollergirl.ca and pivotstar.com are both home grown organizations run by former Terminal City All Stars! We're also always kept in beer by Pabst which is extremely important.

Do you have a special message for your fans?
If you're in Vancouver and you love Roller Derby, come out and PLAY! The Terminal City Mix Tapes training and recreational derby program is open year round and welcoming to skaters of ALL skill levels.

Where do you see your league in the next ten years?
In the top ten! We're working really hard to make Terminal City a welcoming, open organization and hope that our new training program will greatly expand our league with women who want to play derby for fun and fitness and self-confidence. We're hoping that the prospect of low commitment, high fun recreational derby will attract a lot of people and swell our numbers to the point that our competitive teams have the time and space and resources they need to challenge for the Hydra.