Celebrating their 10th season this year, the ICT Roller Girls of Wichita, Kansas are ready to showcase roller derby August 19th-21st as they host the 2016 International WFTDA D2 Playoffs. Hosting has been a long-time ambition for ICT since their first experience in 2007. Learn more about the ICT Roller Girls. 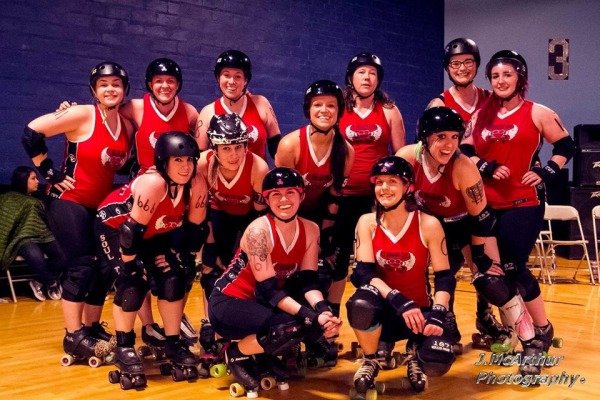 Where are you located?
ICT Roller Girls are located in Wichita, KS.

When was your league formed?
We were founded in January 2006, after Cora Leone and Betty Wannabang created a MySpace page to gauge interest in starting a local league.

When did you join WFTDA?
We joined the WFTDA Apprentice Program in 2009. 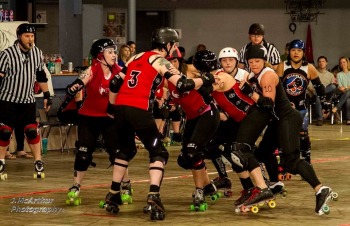 How does your season run?
Our season runs from February through October, with the WFTDA competitive season ending in June.

How many skaters/teams do you have?
We have a core of 40 skaters and non-skating members; there are two teams, All Stars and Havoc.

How is your league structured (home teams, travel team, management)?
We are a skater-owned league, run by a five-member council; the league has a WFTDA charter team and a competitive B-team, both travel regionally. ICTRG also has a competitive junior league under its wings, the ICT Roller Juniors; they're in their third season.

Who is your biggest rival? And have you had any outstanding, memorable moments when you've played them?
Oklahoma City Roller Derby has been a long-standing rival for the ICT Roller Girls. We've shared a back-and-forth history with them for years. In 2013, veteran skater Pooter Smacker broke her leg during the first period, and the team vowed to win for Pooter. The game came down to the last jam, and ICTRG lost. After returning to the locker room, and unbeknownst to the skaters, the officials called a review of points awarded. After review, ICT Roller Girls won, came out of their locker room, and skated a victory lap for Pooter. 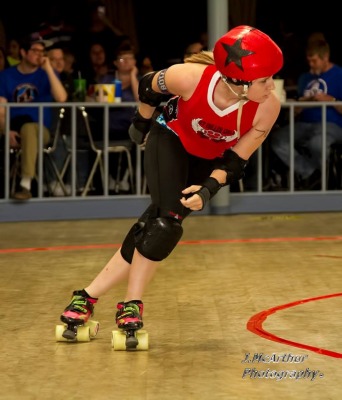 Do you have any sister/brother/junior leagues you’d like to give a shout out to?
We have a junior league, the ICT Roller Juniors. We love our juniors, and we're proud to say that some of our juniors have already graduated from the program and now skate for the ICTRG All Stars.

What are the individual challenges of your city?
Due to the Air Force and the aircraft industry, it is difficult to retain fans and skaters.

What are your biggest training challenges?
Our biggest challenge is striking the balance between training the two levels of play on All Stars and Havoc. Retaining a consistent coach is a challenge that the league overcame, and now is trained by a core group of skaters.

Tell us about your training facilities.
We train at Skate South, an historic skating rink in Wichita. It is the oldest roller rink in Wichita, opening its doors in 1955 as SkateLand; the rink is located next to the Starlite Drive-In.

Where do you hold your public games?
We play our home games at The Cotillion Ballroom. We've been playing there since 2008.

**How many days a week do you practice? How are your practices divided/organized among your teams/skaters? **
We practice three days a week, dividing our practices among the two teams, while still focusing on fundamental skating and derby skills. We also run a newbie training class twice a year, and the newbies practice twice a week.

Who are some of your star skaters on the track, and why?
We want to give a big shout out to our founding skaters, Foxy Mauler and Pooter Smacker, who were at the league's initial meeting in January 2006.

Who are some “behind the scenes” skaters/members who really help your league run?
Shelly Shankya has been a worker bee, writing tournament recaps for WFTDA for the past six years; she also announces for the league during home games and at regional tournaments. Jug Grr Knot has been an NSO for five seasons, and she has helped streamline our non-skating officials. 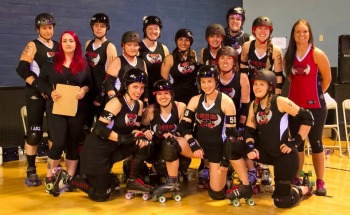 What are some of your league's biggest accomplishments?
We are so pleased to host the first of two 2016 D2 Playoff tournaments for the WFTDA. Hosting has been a dream of ours for several seasons. We got hooked on hosting back in 2007, when we hosted the Big Boys Toy Show. The championship game featured the Texas Rollergirls and the Kansas City Roller Warriors. Derringer, a skater from Texas, skated the final half wearing a zip-up hoodie, and at the last jam, she unzipped to reveal a Kansas City shirt and started blocking her fellow Texas teammates. Kansas City went on to win the coveted serape.

You will be the very first league to kick off the 2016 International WFTDA Playoffs season, hosting the D2 Playoffs August 19-21st. This is your first time hosting a WFTDA Playoff tournament, so what made you decide to take the plunge?
As Kansas' first WFTDA team, one of our biggest goals as a league is to foster a fandom for the sport and to elevate regional roller derby. Hosting a tournament is an ideal way to do this, as it brings the game to our fellow Kansans.

Do you have any big games and/or other tournaments coming up that you're really looking forward to? Why?
We will play in Mayday Mayhem in June in Loveland, Colorado. Then, just one week after, we're skating in the second annual Sooner Skate, hosted by the Oklahoma City Roller Derby.

You have a very close tie with your junior league, the ICT Roller Juniors. What can you share about how you help the next generation of roller derby in Wichita develop and grow?
Being positive role models to young women is something that we take very seriously. We've worked hard to ensure the future of our sport by fostering young skaters through our Juniors program, and we're proud of all of the work our skaters have accomplished, on all levels. Our ICT Roller Juniors are young leaders in their schools and their community, and they're definitely paving the way for future generations of ICT skaters.

Congrats on celebrating your 10th season! What are some of the events and promotions you are doing to celebrate your decade anniversary?
We're celebrating our 10th anniversary season with a specially designed anniversary logo for the season, a throwback poster series, a 1950s-inspired roller derby instructional video, and a Snapchat geo filter featuring our anniversary logo at our most recent home game. We're 10 years and rolling.

Who are some of your favorite sponsors?
We want to give a huge shout out to Oskar Blues Brewing, through House of Schwan. They've been our longest running sponsor, and we wouldn't be where we are without their support. We also want to say thank you to our penalty box sponsor, Wizards Asylum, our favorite gaming place when we're away from the track. We'd also like to give a hearty thanks to Skate South, home of the ICT Roller Girls. Dr. Shawn Morrow is our favorite orthopedic surgeon, having fixed several skaters' ankles throughout the years.

Do you have a special message for your fans?
Thank you to our fans for attending our events and our games. Wichita is such a wonderful community, and we're thankful to our fans for supporting us. It's been 10 years, and we're proud to represent ICT. It's Wichitawesome.