Nestled in Malmö in the south of Sweden, the Crime City Rollers worked hard to become a full WFTDA member in 2012, and now they are looking forward to hosting the first official WFTDA European Tournament in November 2014. This league’s ambition and hard work helps to drive their own successes on the track, and to promote the sport of roller derby in Sweden. Read on to learn more about the Crime City Rollers.

What city are you based in? We are based in Malmö, in the far south of Sweden.

Why is Malmo known as “Crime City?”
Malmö has a high crime rate and a reputation for being a dangerous city, although the crime rate is very low compared to high crime cities in other countries. People who come here from the States for example have been heard laughing and saying, “Is THIS Crime City?”

Roller derby has grown rapidly in Sweden, and there are now a dozen actively bouting leagues. Wow! Why do you think roller derby is so popular in Sweden?
It’s a sport that challenges how we look at sports traditionally, and it gives women a place to be strong and powerful. But it’s also a place to build sisterhood and strong bonds. Maybe that’s why so many Swedish people are compelled and lured into this wonderful thing.

How has Crime City helped to foster the growth of roller derby in Sweden?
One of our founders started with the London Rollergirls in 2007. She was helping out Stockholm Roller Derby, the only league in Sweden at the time, with assistance and advice about hosting, as the London Rollergirls held their first bootcamp in Sweden. Our own league started in Malmö in March 2010 and has helped other leagues do the same since then. Crime City has always welcomed skaters from other leagues and sent coaches and officials all over Sweden to increase the knowledge of the game.

How does your season run?
We have a few weeks off during the summer and at Christmas. Other than that, we are at hard-core training all year round. 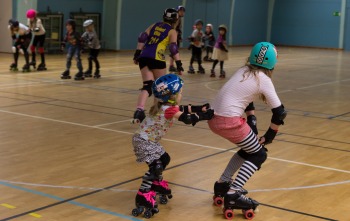 What are the closest WFTDA leagues to you?
Copenhagen Roller Derby is just 20 minutes across the bridge from Malmö. We often train together and scrimmage against each other.

How many skaters/teams do you have?
We have around 80 skaters and we have two travel teams, three home teams, and also Sweden’s first-ever junior team.

How is your league structured (home teams, travel team, management)?
We have two travel teams (A-team and B-team) and three home teams: Stardestroyers, Möllans Mördarsniglar 21424, and Raging Ravens. The home teams are composed of skaters of all levels, and we have an internal home team championship. At the moment, we even have a group of skaters who call themselves the PMS Monsters that will be bouting in a couple of weeks. PMS stands for “Passed Minimum Skills,” which is our name for skaters that have passed their minimum skating skills requirements but are not yet part of a travel team. They will be playing a rematch against Västerås soon, which is a Swedish league that started in 2011.

Who is your biggest rival? And have you had any outstanding, memorable moments against them when you bouted?
Stockholm Roller Derby! We played Sweden’s first roller derby bout against them back in 2011, and we keep playing each other every year. We might have won the first one but Stockholm took the Swedish championships. We have players moving between the leagues due to work and relationships so we will always have a great rivalry going!

Do you have any sister leagues you’d like to give a shout out to?
Bear City Roller Derby from Berlin, Germany. They have always looked after us and helped us grow: from sending their coaches and officials to get us up and running, to hosting us when we’re in Berlin. They always take care of us! 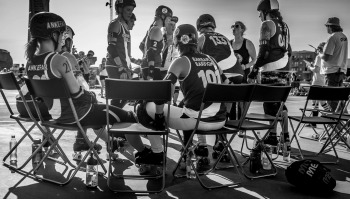 What are the individual challenges of your city?
Our biggest challenge right now is to get an audience to come to our bouts. Although we’re a fast growing sport in Sweden right now, it is a lot easier to recruit skaters than it is to recruit fans.

What are your biggest training challenges?
Since our league has grown so fast, it’s probably how to keep everyone happy and challenged at all levels of their training, and to be able to provide enough practice hours and coaches for every level.

What kind of training/bouting facilities do you have?
We currently train in two sport halls but are looking for a permanent home to train in. Depending on availability and the expected crowd, we bout in a few different halls.

How many days a week do you practice? How are your practices divided/organized among your teams/skaters?
We have practices all seven days of the week. We aim to divide our practice hours quite equally between the different levels so that skaters have the opportunity to develop. Everyone can practice at least twice a week, usually in at least one specialized practice. There is also a league practice before our scrimmage every Sunday, where everyone from fresh meat to A-team players meet and play derby together.

Crime City Rollers have been selected to host the first official WFTDA European Tournament this fall. Congratulations! What made your league decide to take on this challenge?
It could very well be that one of our WFTDA skater reps has way too many kids (two), and is therefore not getting as much traveling time for derby as she wishes. So in her words: “if you can’t go to the tournament, bring the tournament to us.” So she did! We are all absolutely thrilled and also a little bit scared about this. Mostly we are excited though. 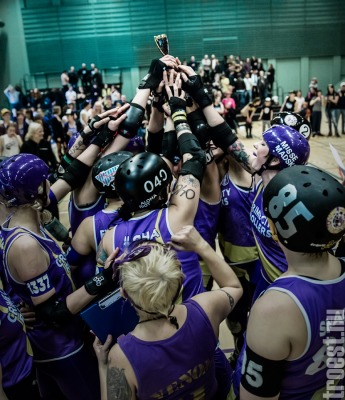 How is your league preparing to host the first official WFTDA European Tournament? What can players and fans look forward to in Malmö?
We are working flat out to make this memorable in every way. We have a few aces up our sleeve and we are hoping we can pull it off.

Who are some “behind the scenes” skaters/members who really help your league run?
There are too many to single out any one skater since we have passionate people everywhere in the league, amongst the officials, the coaches, in our different workgroups, on the board, and on the track. But we are super lucky to have them all!

Who are some of your star skaters on the track, and why?
It takes a village! A single player isn’t a star without a team. But of course, we have about three handfuls of players that have been or are on Team Sweden, one player on Team France, and one on Team Finland, which is pretty amazing. Our best players all have their personal qualities that make them shine on the track, but they also provide inspiration for other skaters in the league, which is an important thing. We all need motivation, and something to strive for, no matter if it’s players on Team USA or one of our own superstars that makes that happen for us.

We’ve seen a number of photographs of Crime City skaters wearing ski masks on the track. What is the story behind the masks?
We wanted to show our support for the Russian activist group Pussy Riot, so the A-team did a couple of skate outs in colourful balaclavas when the members of Pussy Riot were put in jail.

Crime City Rollers seem to operate in both Swedish and English (for example, your website includes information in both languages). Please tell us about your league's bilingualism.
Vi förstår inte vad du menar! [We don’t understand what you’re talking about!]. We have a couple of foreign skaters in our league, so we keep jumping back and forth. It can be a challenge at times, not everyone are comfortable coaching or speaking at a meeting in English. Sometimes, discussions end up being in both languages at the same time, and there’s a lot of spontaneous live translations being whispered into international skaters ears during practice! We do our best to be inclusive and switch to English whenever there is a non-Swedish speaker in the room and have English speaking announcers at bouts when we meet non-Swedish teams. Most of our posters, flyers and event texts are in English as well. But still, a lot of the communication in our internal forum is in Swedish, which can be a problem. 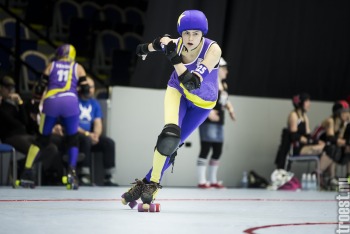 Do you have any big bouts coming up that you’re really looking forward to? Why?
We are going to ECDX, hosted by the Philly Roller Girls! That is one of our big goals this year, closely followed by the Swedish Championships which will hopefully keep us in the top 10 in the WFTDA in Europe, so we can take part in the 2014 WFTDA European Tournament here in Malmö.

Please tell us about your league’s involvement with the documentary film, “Crime City Love.”
Filmmaker Klara Levin wanted to make a documentary about the people in derby. So it’s really a portrait of four of our players: Bobicat, Bitter Fit, Fenix (now playing for London Rollergirls), and Aloha Riot, and how derby has affected their lives. It shows both the good times and the bad, which is how derby is for most players – it is something that makes us love, laugh, and cry. The movie will be available on dvd at some point, but for now you just have to settle for this teaser.

How does your league give back to the community?
We have an open skate session every Friday where anyone of any age can come and try out roller derby for free. People can borrow gear and we help them out. It’s a way for us to show off derby while providing a good spare time activity for kids in Malmö. We also participated in the Swedish charity project Musikhjälpen along with several other Swedish leagues. This project raised money for health care for young mothers in developing countries. 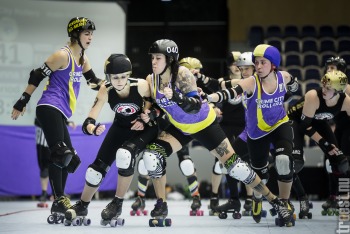 Do you have any big fundraisers coming up?
Our A-team is focused on going to ECDX and in big need of funding of course, so that is something that will be coming up on our website very soon. So please have a look there if you feel like giving a helping hand to the first Swedish team to ever compete at ECDX. Wow…it’s mind blowing just writing about it!

Who are some of your favorite sponsors?
We really need to improve on recruiting sponsors and we are now more than ever before looking for sponsorship deals. We should also say thanks to our fans, and members. And also to the city of Malmö that really believes in us and has helped us in many different ways, like painting a track at Stapelbädden Skate Park, helping us get organized, applying for grants, holding workshops, booking great halls for practice with a derby track marked out, and helping fund a skate-gear library. We look forward to even more opportunities for sponsorship now when we try to take on the world outside of Europe too.

Do you have a special message for your fans?
We love you very much! Thanks for your support and we hope to see you all at our coming bouts this year!