Stefanie Mainey brings her Judo and throwing skills – and strength – to support her drive to be the most competitive roller derby skater she can be. Even though she spent much of this season dealing with injuries, Stef Mainey was still able to train and execute, and earned MVP of the East Region Playoffs. Read on to learn more about London Rollergirls’ powerhouse, Stefanie Mainey… 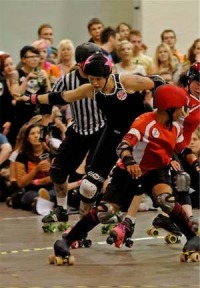 Home league: London Rollergirls, and I am also Captain of Team England (for the Roller Derby World Cup)

What is your roller derby playing position of choice?
Blocker

What is your skate gear of choice?
I use Pro Designed wristguards and elbow pads. All my wheels are Atoms, I never use anything else. I recently upgraded my skates at Five Stride Skate Shop to the 595 Reidell boot and Powerdyne Rector plates.

Do you have a pre-bout ritual?
I have a smoothie and scrambled eggs on toast and double check that I have everything I need. I usually get to the bout venue really early and test the floor. Finding the right wheels for a floor is really important to me, if I don't have confidence in my wheels then it affects my whole game.

What is your favorite derby moment?
Definitely being voted MVP at this year’s East Region Playoffs.

Who are your derby heroes?
DeRanged and Bonnie Thunders – They have such different skating styles and yet are both amazing players. They’re extremely dedicated to becoming better players and lead the way for the rest.

Do you have a motivational quote?
"If you have to hit then you’ve failed at blocking." – Fisti Cuffs

What do you think about when you're lacing up your skates?
I think about what my team needs from me in that game, how to shut down the opposing team, and how best to do it.

Do you have a theme song?
Electrelane – I’ve Been You’re Fan Since Yesterday 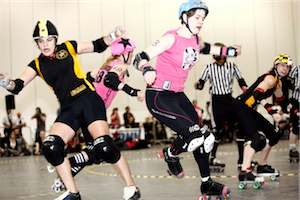 Do you have a signature move?
I think my signature move is the ready position I get into as I’m about to positionally block someone. I consider it one of the most important skills as a blocker and teach it a lot at bootcamps and when I go and train other leagues.

“Ready position” is the low stance stance I get into before I block someone. I learned about ready position when I used to play badminton as a teenager, but it's a stance you see in pretty much every sport that involves sudden and explosive movements in any direction such as football, rugby, or tennis. It's about getting your body in the best position to react to what’s about to happen and making your reaction time fractions of a second quicker. It makes a huge difference to my game. Annoyingly, as it's something you do just before you hit someone, there are not many pictures.

How did you get involved with roller derby?
I saw it on a TV programme called ‘Switched’ about 5 years ago and thought it look amazing but didn't expect to find a team in London. But then I found out a friend of mine had joined the London Rollergirls, so I contacted her and started skating straight away.

How did you decide to use your real name instead of a derby name?
My skate name was Correctional Felicity, but having a derby name just didn't sit right with me so I dropped it. It’s not anything I feel particularly strongly about either way, it just wasn't for me any more. 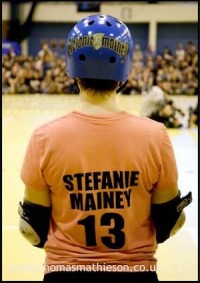 Can you talk a bit about your rookie year and how you learned to play roller derby?
I was so lucky, I started my rookie year about 6 months after LRG started so we were all in the same boat and were thrown in at the deep end. I scrimmaged on my second week there, it was a really steep learning curve but we were all learning together.

Any advice for girls who want to join roller derby?
It will take over your life, be prepared for that. Be eager and ready to learn. Always try and be the doer on the track not the shouter. You are responsible for your own progression, it’s not anyone else’s fault if you’re not the player you want to be. Respect the refs and learn the rules.

How would you describe your derby playing style?
I’ve always been physically stronger than most other people I meet on the track, but I’ve never wanted to rely on that. I always aim to play smart not hard - preventing a bad situation is better than curing it.

What is your pre-derby sports/skating background?
I started playing Judo from the age of 3 and played for 10 years. I was a very active child and took part in pretty much every after school sports activity that was on offer. I was particularly good at any sport that involved throwing like javelin, discus, and rounders (the UK version of baseball). I think all these sports helped me develop strong core strength early on which is vital in derby.

You were named the MVP of Nightmare on 95, the East Region Playoffs. Congratulations! You were one of London Brawling’s go to jammers, and put in a lot of track time. How did you prepare for the tournament? With this being your first WFTDA playoff tournament, what were your expectations going in?
I had been injured for a lot of the year so I had to do the majority of my preparation off skates. I cycle around 80 miles a week and I’ve been working on my core strength a lot as well. After I got back on skates, the focus for our team had changed; it's all about teamwork, making walls, being in pairs, etc. Before my injury I had always been a player that enjoyed a lot of freedom as a blocker and roamed around the pack on my own, so coming back and having to completely change my teamwork behaviour was pretty hard, but it's definitely improved my game. 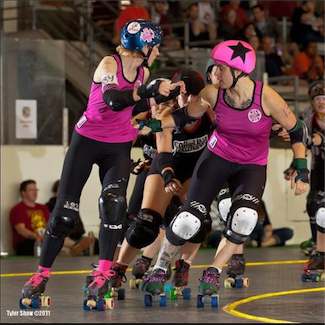 What are you taking away from your first WFTDA Big 5 tournament experience?
The best teams will always be those with the best teamwork. You can rely on strong individual players to get you to Playoffs but you need strong teamwork to get you to Championships.

The first half of the London versus Philly Roller Girls bout at WFTDA East Region Playoffs had us wondering if you could adapt to Philly's dominating style of play. What did you tell yourself during the halftime that helped you come out so strong in the second half? What did you learn from playing this bout?
Philly had a great pack start off the jammer line style that we had never come across before. It was very effective and when we regrouped at half time we knew we had to break up their tight walls and try and make sure they didn't get the back. We had to regain our focus and play our own game rather than just react to their game.

Toward the end of your bout against the Boston Massacre at the WFTDA East Region Playoffs, you taught us all a bit about defensive jamming as you went up against Claire D. Way. What did you do to educate and prepare yourself to play so strategically? What role do your team- and leaguemates have in developing your strategy plans?
We know we have to keep up with the latest strategies otherwise we’ll be left behind so we watch A LOT of game footage to see what other teams are doing. Before we set off to Playoffs we practiced so many different scenarios based on how we’d seen other teams play to make sure that we were as prepared as possible.

What advice do you have for other jammers who aspire to play like you?
Work on your agility and core strength. Your core strength is what will keep you from getting knocked over the inside line by blockers bigger than you, and your agility will help you to avoid those hits in the first place.

In the last seconds of the nail biter bout against Montréal Roller Derby for 5th place at the East Region Playoffs, you delivered a hit on Iron Wench that prevented her from getting the 2 additional points needed to tie the bout. What was that moment like and did you realize how important that hit was at the time that it happened?
I started that jam in the box so I missed our team chat and tactic for the last jam. I knew we had to keep Iron Wench in the pack and get Kamikaze Kitten out to stand a chance of winning. When I came around the corner and saw Iron Wench coming up the inside I knew I was the best positioned blocker to get to her so I aimed to hit her over the inside line. I knew anything to keep her back was important, but I didn’t realise that it may have been a game saving hit at the time.

How has your involvement in roller derby affected the way you live the rest of your life?
I would say it’s had a huge impact. I met and got married to a rollergirl in my league. I’m 30 now and I’m fitter then I have ever been.

Any thank yous?
I would like to thank my wife Olivia Coupe for being awesome and supportive, my family, everyone at London Rollergirls, in particular Brawling captain Kamikaze Kitten, for being a constant source of inspiration and positivity and Brawling Coach, Ballistic Whistle, for working exceptionally hard getting us ready for Playoffs.

For even more information about Stefanie Mainey and the London Rollergirls' experience at this year's East Region Playoffs, read this interview.