Making roller derby skaters everywhere uneasy since 2004, Pia Mess is a triple threat on the track. She started her career as Rat City’s league MVP, and has appeared in tournaments from Bumberbout 2006 to Dust Bowl 2010. Now skating for Silicon Valley, she continues to keep opposing skaters on their toes with her hard hits and smart play. Learn more about the affliction that is Pia Mess. 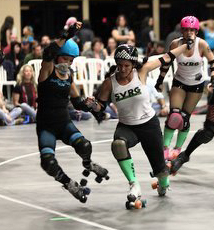 Tagline: “I don’t suffer from PMS (Pia Mess), but everyone else does!”

What is your (roller derby) position of choice?
All positions (jammer, pivot, blocker)

What is your skate gear of choice?
Omegas, Low Boys and Poisons by Atom Wheels; Zuca skate bags; I love my PivotStar sleeveless jammer hoodie.

Do you have a pre-bout ritual?
If it’s a home bout I am usually on set up, and that takes my mind off things until one of our sponsors comes in with TO DIE FOR Philly cheese steak sandwiches. So, I eat one. At away bouts I have a particular play list on my iPod that I listen to over and over.

What are some of your best/favorite moments in roller derby?
Oh my gosh…so many: Leading the Sockit Wenches (my Rat City home team) to the league championship; winning the first Dust Devil with Rat City; being featured on an episode of TV Made Me Do It; being an SVRG team member and winning the very first tournament we were in (Dust Bowl 2010); being chosen for the Atom Wheels’ All-Star team; and now being WFTDA’s Skater of the Month!

Who are your roller derby heroes?
I will always love every Sockit Wench. I also love Pandamonium, my fellow coach with SVRG, and all of the skaters at SVRG – they always push themselves so hard, ask questions and always want to learn more.

Do you have a motivational quote?
I think I have two:
1. "Learn basic technique first, then the rules, and work on your endurance both on and off skates. To be a great derby player you first have to become a good skater."
2. “Pain is just weakness leaving your body.”

What goes through your brain as you lace up your skates?
“How many practices has it been?” ...I break a lace pretty much every 3 to 4 practices.

Do you have a theme song?
Dream Weaver by Gary Wright. It’s a funny story. ☺

Do you have a signature move?
I had to ask some fellow skaters about this one because I didn’t think I had a signature move. Apparently I do: the twirl. I hate to fall, so I will do everything possible to avoid it. And I usually end up twirling around once or twice. It’s quite funny actually, and a lot of times I don’t even realize I have done it. See “the twirl” here. 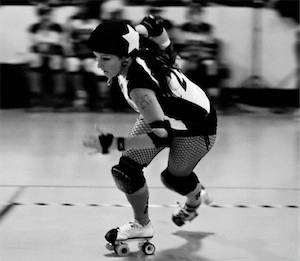 Any advice for girls who want to join roller derby?
Just make sure you have what it takes to put into it. I’m not talking about skill because that’s what practice is for. I’m talking about the time commitment. Between practice, meetings, committees, commuting, bouts, etc. derby really is a full time job! Now, let's talk about practice: some girls pass tryouts and think they can instantly be on the A team. For a handful of girls this is true, but for most of us it's not. You really have to practice, practice, practice. Don’t get discouraged and set one or two small goals for yourself at a time.

How would you describe your derby playing style?
Smart. I am very strategic. I’m also good at finding the hot heads and pushing their buttons.

How did you get involved with roller derby?
I was watching TV while nursing my second child (she was 4 months old) and saw a clip on the news about a new league starting in Seattle, and they were looking for girls. I had just had a baby and hadn’t skated in 15 years but roller derby had been a dream of mine since I was six. So I HAD to try out. And thank god…I made the league!

How long have you been playing roller derby?
2011 is my seventh season.

What is your sports/skating background?
I dabbled in all sports, but mainly soccer. I have played since I was 4 and through high school/college. Prior to kids, I played at a super high competitive level. I think that has really helped with derby. As far as skating, just your weekend birthday party here and there. Fast skating to Pat Benatar's “Hit Me with Your Best Shot!”. The closest rink to where I grew up was about an hour and a half drive each way so it was a real treat to get to go there.

For those newer skaters who don't know your history, could you talk about your 2004 rookie season with the Rat City Roller Girls?
I was in one of Rat City’s first rounds of tryouts (if you could call it that back then). It was such a great year. My league mate, Bonnie Collide’s sister, Derringer, played for Texas. I remember she was in Seattle for a family visit and came to our practice and talked about derby and taught us some basic drills. We were all in awe and hanging on her every last word. We played in a small rink owned by the Tamaccio family. We sold out our very 1st bout! There were hardly any rules back then. Then to be named Rat City league MVP…ah, the memories!

What are your favorite memories from those times?
One of them would be outgrowing the skate rink our first year and moving to the hangar. We went from selling out at 400 to selling out at 2,000. Another big one would have to be Bumberbout. We were lucky enough to host our first tournament in the Key Arena (where Rat City bouts regularly now) during the annual music and arts festival, Bumbershoot. I remember playing Texas. We were all so nervous, because they were such a big part of us starting up and getting to where we were at the time. We looked up to them so much. Then here we were on the track with them! I remember hearing the announcer say something about 18,000 people being there. It’s hard to imagine, but when I re-watch Blood on the Flat Track, the stands were full!

What are some of your greatest roller derby accomplishments?
As mentioned above, I was named Rat City league MVP in my rookie season. As team captain I led the Sockit Wenches to the league championship in 2006. That same year I was named MVP of the Sockit Wenches and was also the entire league's top scoring jammer. In 2010 I was invited by the Stuttgart Valley Rollergirls (as the only coach from the United States) to lead Germany's first-ever boot camp clinic. The clinic was attended by skaters from 17 leagues in 12 different countries and was a huge success. And most recently being a skater/coach for Silicon Valley Roller Girls and helping them win Dust Bowl 2010, our very first tournament entered!

You are known throughout the roller derby community as a great coach who works a team hard. We’ve heard that your training sessions are affectionately called "Pia's Puke Practice". How do you balance your own needs for practice and skill development with your duties as league coach for SVRG?
It's actually very simple: I do everything the girls do. And I am probably in the top 2 as far as being in the best shape. So I gauge my practices on how I feel when I am skating. If I am just barely breaking a sweat then I know they are getting a pretty good workout. If I am hurting or dripping sweat…that’s usually when I get a puker or two! We have some other fabulous coaches in SVRG, so on the other nights I’m a learning skater while they coach.

In your "real life" you are a wife and mother, and a personal trainer/CrossFit trainer. On top of your league and life commitments you manage to find time to run bootcamps for other leagues. First off, where do you find the time?
I know right?!?! I wonder myself sometimes. I actually think I do my best when I am busy. I am pretty good with time management. Plus my husband, family, and neighbors are very supportive and help out if needed. 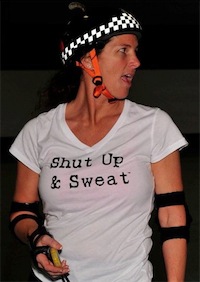 How often do you run bootcamps?
As often as I can. I try to do at least two a month, depending on if they are international or not. Interested leagues are welcome to contact me through my website www.piamess.com and/or my Facebook fan page (Pia Mess 24/7).

We heard that you are sponsored by Atom Wheels, and have been selected as a member of the Team Atom All Stars. How did you develop a connection with Atom Wheels?
Let's see…Julie Glass (Atomatrix) skates with Oly. Because I am originally from Washington I keep tabs on all the leagues up there, how they are doing, who they are playing, etc. I bump into Julie and her husband Doug when I visit home and go to local bouts, as well as at Regional Playoff tournaments, National/Championship tournaments, etc. Plus, some ex-league mates of mine from Rat City now skate with Oly.

What is it like to be at a level in our sport that you are nationally and internationally recognizable?
It's actually quite an honor. I NEVER in a million years would have expected anything like this. I tried out for Rat City just to say, “I tried out”. I didn’t think I would actually make the league, and 7 years later…here I am!

SVRG won its first sanctioned game of this season against Bellingham on February 5th, 136 to 128. Do you have any predictions about how your league will do this year?
I really think it’s going to be a great year. We have a strong team and we are like one big happy family with NO drama! That’s right…NONE! And honestly, win or lose, we are out there to have a good time, and we do have a good time. That’s the most important thing.

Anyone you'd like to take the opportunity to thank?
Oh my gosh…yes. I’m always thanking my family, my friends and my kids for being so supportive and helping me make my childhood dream become a reality (even if it is 35 years later). I will also thank Atom Wheels for sponsoring me and letting me roll on my favorite wheels. Thanks to my friend Eric Keller for nominating me to be WFTDA’s skater of the month, and thank you to WFTDA for choosing me! I can't thank my fellow roller girls enough: these past seven years have seriously been some of THE BEST years of my life. I have to give a shout out to Jerry Seltzer and his family. Thanks Jerry for becoming a good friend over the past year and for all you have done in derby land past and present! Last but not least, Steve Wozniak (The Woz) for being so supportive of SVRG.