The Golden Girls of roller derby may struggle with finding a venue, but they don't struggle when it comes to winning fans! While they work hard to carve out their own spot at the top of the WFTDA Western Region, the B.A.D. Girls also give other derby girls the chance to skate with them at open black and white scrimmages. For more information about the Bay Area Derby Girls, read on… 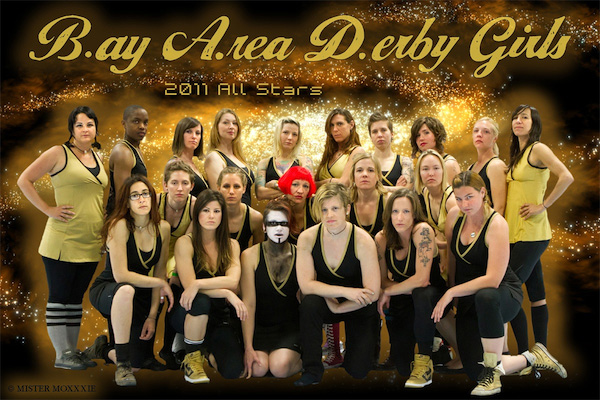 Location:
B.A.D. headquarters, “The Pearl”, is located in Oakland, CA, but we hold games across the Bay Area.

How does your season run?
Historically our home season has been from February to November, but this year we are testing a shorter, condensed home team season that runs from February to July. Our Travel Team trains throughout the year and will be hosting a tournament in August before the WFTDA Big 5 tournaments.

Are you close to any other WFTDA leagues?
One of the closest leagues is also one of our most favorite, our sister league, Sacred City Derby Girls (Sacramento). Santa Cruz Derby Girls, the Silicon Valley Roller Girls (San Jose), and Sonoma County Roller Derby (Santa Rosa) are also a short drive away. 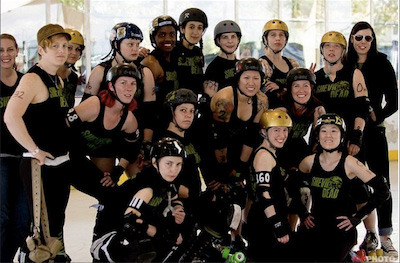 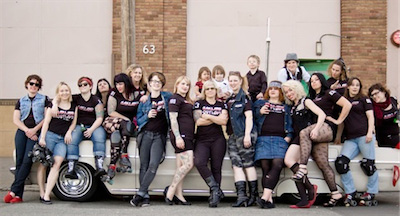 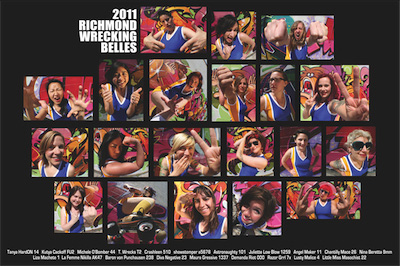 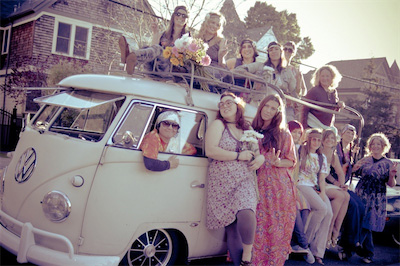 How many skaters/teams do you have?
We currently have 100+ skaters. There are four home teams: San Francisco ShEvil Dead, Oakland Outlaws, Richmond Wrecking Belles, and the Berkeley Resistance. Once a new skater enters the league and completes their trial period, they are eligible to be drafted onto one of the four home teams. Skaters waiting to be drafted are entered in the skater ‘pool’. The Golden Girls, our All-Star Travel Team, pulls the best of the best from our home teams to represent the Bay.

How is your league structured (home teams, travel team, management)?
As mentioned, B.A.D. has both home teams and a travel team. In terms of management, every league member is required to serve the league through one of the committees: HR, Finance, Events, Sponsorship, PR, Web/Art, FUNdraising, and Coaching.

How many days a week do you practice?
League members are required to attend a minimum of three units (four and a half hours) a week. Our Travel Team members typically practice an additional four hours beyond the minimum each week.

Who is B.A.D.'s biggest rival? And have you had any outstanding, memorable moments against them when you bouted?
Rose City Rollers is our Western Regional nemesis. Memorable moments include winning our game against them at the 2010 West Region Playoffs in front of a huge crowd of boo-ing B.A.D. fans, to secure our spot at the Championships in Chicago. We also have a very different, super friendly kind of rivalry with the Philly Roller Girls.

Do you have any sister leagues you’d like to give a shout out to?
Sacred City Derby Girls! They are pretty and we love them.

What are the individual challenges of your city?
Finding a decent, affordable venue close to convenient public transportation that can accommodate our growing crowds has been a bit of a challenge. Any events scheduled around Burning Man have been blacked out due to mass migration of Bay Area residents to the playa.

Who are some of your favorite sponsors?
Cruz Skate Shop outfits all of our skaters with our gear and provides lots of lovin’ support. Pyramid Brewery has been a consistent sponsor for a number of years. Not only does our rep Shasta supply us with booze for our fans and help out at events, but they also provide sponsorships for all signage.

What are your biggest training challenges?
B.A.D. is constantly trying to bridge the gap in skill levels within the league. Our Travel Team is only as strong as our weakest players and we strive to build from the bottom up, by training from the top down.

Who are the best "behind the scenes" skaters who make your league run?
Our Heads dedicate countless hours to keep the league running. And of course, none of this would be possible without our awesome ref/NSO crew lead by Level 4 WFTDA-certified Head Ref, Jonathan Lee.

Who are some of your star on-track skaters and why?
Whenever we’re in doubt, we look to the ladies in gold. Our Travel Team plays with solid teamwork and their performance inspires all of our league members.

What kind of training/bouting facilities do you have?
The Official B.A.D. headquarters is a gritty warehouse in West Oakland and we’ve called it home for a little over a year. There’s been a lot of hard work, elbow grease, and love from the league, notably from ref Sexy Beast, to make our house a home.

We understand that the Bay Area Derby Girls Reckless Rollers is a recreational roller derby league you have recently formed. What made B.A.D. interested in starting a recreational league, and how do the Reckless Rollers fit in with the rest of the B.A.D. teams?
B.A.D. saw a derby void within our organization. We had plenty of retired skaters who still wanted to skate, and we had new skaters who didn’t want to wait until our summer boot camps to start rolling. In comes Reckless Rollers. We enroll brand new skaters each month and bridge the skill gap with fun practices that emphasize proper skating and derby skills, endurance, speed, and overall fitness. Skaters who successfully pass a quarterly review are welcomed to the league as transfer skaters. Membership is flexible, affordable, and skaters are considered charter members of B.A.D.

We've heard that B.A.D. is hosting regular black and white scrimmages, and the next one is happening on July 23rd. What made your league decide to host these open scrimmages? What do you think your skaters (and others) gain from attending them?
Since there are so many leagues, both WFTDA member leagues and not, surrounding the Bay Area, we are looking to build the local derby community and provide a venue where we can all get scrimmage experience against other skaters.

B.A.D. recently won the Battle for the Coast 2011, put on by the Ventura County Derby Darlins. Congratulations! From the scores, we can see that you really dominated the competition, and remained undefeated. How do you prepare for a weekend packed full of that much bouting? How do you keep your team focused on development throughout a tournament when you are beating teams by 50 points or more?
The Travel Team has done a phenomenal job of focusing on the team and their development. In the past couple of years we have been on both the wrong side and the right side of bouts with large point differentials. Last year versus Rocky Mountain Rollergirls, we opened the season only scoring 17 points and losing by more than 160. B.A.D. doesn’t really focus on the score; they really try to focus on one another and their own personal games.

Specifically for the BFTC, the tournament allowed for all twenty of our charter skaters to skate. Rarely do we have the opportunity to have the entire roster work with one another and really build the team bonds necessary to get through the long and grueling derby year. BFTC was a great opportunity for us to focus on our team and how we are playing.

B.A.D. is back in the top ten – at number 6 – on the Derby News Network's Power Rankings for June 2011, and is currently at number 4 in the WFTDA Western Region. Do you have any predictions for the 2011 Big Five Tournament season?
We are in the same boat as the rest of the teams in the Western Region: there are a lot of strong teams and only three spots. Unless the rankings change drastically or the tournament seeding process is revamped, it looks like we would face our historic rival, Rose City’s Wheels of Justice. They are just a solid team and it will be a tough bout. My only prediction here is it will take 60 minutes of solid play for either team to get to the second round. From there the road is no less difficult.

The tables will be turned as we basically skated in front of our home crowd last year and now they get to return the favor. Final prediction is final score, 114-97 but it is up to both teams’ skaters to determine on which side of the score they will end up. B.A.D. recently played the current number one team in roller derby, the Rocky Mountain Roller Girls (on May 21st). What did you do to prepare for this big match up? What was the experience like for your team? (Final score: 126-82 for Rocky Mountain)
In many ways, we had prepared for Rocky in the same way we prepare for any other bout. We need to know our opponents’ first pass strategy, tendencies of opposing jammers, and determine which opposing blockers can best control the pack. Honestly, it was easy from a coaching perspective because our skaters personally wanted to skate their best against the best team in the nation. As one of my old coaches once said, “If you can’t get excited for this, then you are probably dead”.

Our goal was not the win because we know the score takes care of itself. We wanted to put together two strong halves of roller derby and to be able to say that we skated to the best of our ability. I believe the team took another very positive step forward in our development and preparation for the Western Region Playoff tournament. Ultimately, I think we showed ourselves how far we have come, how powerful our team can be when we skate as a unit and also where we need to go from here.

We also make sure to high-five each other as much as possible. 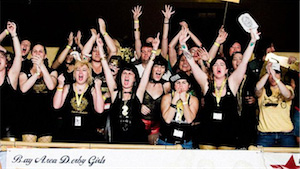 B.A.D. always seems to travel with a number of fans, fully decked out in gold and doing whatever they can to support their team. Can you tell us a bit about your fans, and how they contribute to B.A.D.'s roller derby successes?
The greatness of this sport can truly be measured by its rabid fans. We feel incredibly lucky to have many of them on our side. Plus, who doesn’t look good in gold?

Is there any other information that you would like to share with the readers of wftda.com?
B.A.D. All-Stars went through some wardrobe growing pains before becoming the Golden Girls you know today. Previous incarnations include simple black and white, turquoise, and fuchsia!

Do you have a special message to your fans?
Thank you for being a friend!